ROBIN PILCHER'S AN OCEAN APART AND STARTING OVER 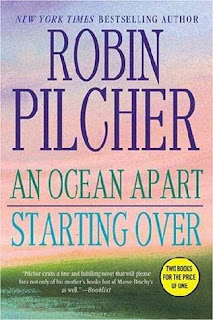 My first read of Robin Pilcher and it became two reads as this is two stories in one. It was difficult physically though because at 1000 pages it is quite cumbersome to handle.

The stories deal with family, with relationships mainly and with its very descriptive settings make for a very interesting read.

In Ocean Apart we have a very young man widowed and finding himself totally unable to cope with living. He is existing almost as a shell of his former self, a facade maintained for the best of his three young children and his aged, bereft parents who themselves are bewildered and not knowing how to cope. How David manages his life with the loss of his beloved wife, what he does to take little steps to come back to the land of the living is what this story is about.


In Starting Over the story centers around Liz dealing with the break up of her marriage to Gregor. Her grief and hate over the break up are huge and how she tries to maintain a facade of peace for the sake of her son and her father fill her with bitterness at the same time. It does not help that Gregor continues to live in the same village almost next door with his new girl friend. It also does not help that due to their acrimonious separation the estate/farm is facing bankruptcy and what was in their family for five generations has now to be sold to a golf course developer so that Liz and her father and also Gregor can climb out of their financial ruin.


Both stories are emotional ones. They are also stories one can identify with as these are circumstances that all of us face in one form or the other. How individuals manage to cope or not cope depends on their individual strengths or weaknesses but it makes for a very intimate read.
Very descriptive of settings, landscapes and backgrounds - these are relaxing reads. I will be looking for his books.
Posted by Mystica at 8:45 PM

I wanted to pop over and say hello....how have you been?

Mystica, I am always amazed at how eclectic your tastes are! Thanks for sharing,