THE GLASSBLOWER OF MURANO by MARINA FIORATO

Leonora's story makes you believe in karma or fate! born in Venice but brought up throughout in England by a very matter of fact English mother who does not want her daughter to know anything of her Venetian ancestry, Leonora's story is almost foretold with  events unfolding that you knew would take her eventually to Venice.

Divorced by a husband who wants a child and (Nora as she is known, he actually thought the name Leonora was too fanciful) unable to provide one, Leonora decides to up and go back to Venice to the glass blowing industry of Murano and find out for herself the background of Corradino a very famous glass blowing maestro who is incidentally her very famous ancestor. Looking for her late father Bruno was just incidental to Leonora. (thought this was a bit strange).

The plot is very good. We have the first female glass blower in Murano history - returning to her roots and being offered the top job in the industry. We have romance in the form of Alessandro a policeman who is in the process of becoming a detective and the romance blossoms in Venice. We have Corradino himself very famous but at the same time with a murky past as a traitor to both the industry and to Venice for having sold the secrets of the glass and mirror industry to the Court of France. We have Leonora's determination to clear Corradino's name once and for all as she firmly believes in his innocence.  To top it all we have the most descriptive views of Venice at all times and from different perspectives. From the point of view of Venetians who seem antagonistic that they have to live their lives purely for the purpose of pleasing the tourist and then we have Leonora's views on Venice as well. First as an outsider and then as a "sort of" born again Venetian herself!

The storyline was good, the characters fell off a bit. The descriptiveness of the novel was enchanting and this made up for me any shortfalls in the actual story.

Leaving Melbourne tonight with twelve hours in Singapore in transit. Looking forward to to ION Orchard and Mahaco Impex (for silk) and to eat a good Laksa! 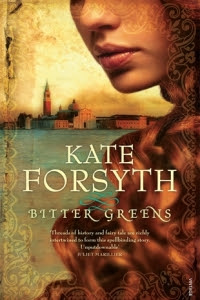 I could not believe it that this book was available so soon in the Carnegie library. Best sellers take a while to reach this library. So when I saw it I grabbed it even though it was rather a big tome!

Described as a reinvention of the Rapunzel fairy tale, it deals with one of the oldest story tellers of this story Charlotte Rose de la Force. This is a story of three people - we have the tragic figure in the tower Margherita alias Rapunzel, the wicked witch Selena who needs young virgin women to perpetuate her youthfulness and of course the teller of the tale Charlotte Rose.

However the story is not just about the girl in the tower and how she escapes it but about the teller Charlotte Rose. Her escapades in the French court (many and varied) and how she is banished to a convent which she accepts with very bad grace until she finally realises the futility of trying to escape the anger of a king who banished her from his court. It is sad listening to Charlotte Rose's story itself. Her total dependence on the men in her family who failed to protect her and then threw her to the wolves in the Court. The absolute authority of the King in all matters and how many women languished in convents to die forgotton there was unimaginable. Life in the convent was hard and for a woman of beauty, glamour and grace it would have been doubly hard, made harder by the bitterness and vindictive of her fellow nuns. We also have stories of black magic, lust and obsession for youth on the part of the Wicked Witch Selena.

There is a lot of detail in this book - the debauchery and many excesses of the court in France, the duplicity and arrogance of the King, the power and influence that the mistresses of the King had over everyone and everything in France and then we go backstage to the wheeling and dealing of the convents who accepted dowries for their nuns, the poverty of the time ignored by almost all, the violence of the time taken for granted as part and parcel of society and the overwhelming helplessness of the Plague when it comes.

A fascinating story, though tough to read in one go. I am just glad I got it this time in Melbourne.

A THOUSAND DAYS IN TUSCANY BY MARLENA DE BLASI

I seem to be on an Italian theme now. And loving it!

I did not read the first book by this author so I had to read about it and find that their first base was Venice and then they just upped and came over to this small village in Tuscany redolent with olive groves, chestnut groves, a rural life style which was surreal in parts (idyllic to read about but I dont know about the practical side of actually living it).

She is a chef/writer of some acclaim, he is a banker and how they make this change and make it work is the story. Interspersed of course with glorious food and wine (receipes included), mouth watering receipes.

The story rambles on keeping in time with the seasons like agricultural communities all around the world. Life being dictated by nature and what has to be done now and what has to be done next month. The spirit of a rural community, everyone knowing everyone else and a lost tradition of helping out their neighbour and no question of "personal space"!

Altogether a very relaxing, beautiful book to read. Sadly I am coming to the end of my stay in Melbourne and today will be my last visit to the library to pick up four books which I have reserved. It will be lovely to get back home but for the moment it is a bit sad to leave not just the children but my first grandchild as well.

I am on a Venetian theme right now. Mind blowing these books!!!

Me and You by Niccolo Ammaniti. A nice storyline here. - family story with intense emotion and drama.

Blenheim Orchard by Tim Pears. Again a family story (which I like very much).

It's Monday! What Are You Reading? hosted by Sheila at Book Journey.

This is one of those books which I have picked up from the library and am just 100 pages in. Absolutely gorgeous.

SOMETHING MISSING BY MATTHEW DICKS

This can only be described as quirky! the imagination of this author baffles me. How on earth do you come on a scenario like this and more importantly make it work magnificiently.

Martin middled aged and very set and organized in his ways has a very big secret. He is a thief who systematically robs houses again and again of not the usual crystal and antique silver and diamonds (though he does that also but only after meticulous planning) but takes things like soap, toilet paper, detergents which he decants into bottles of his own and even medicines which he separates into pill size boxes all labelled clearly so there is no mix up. His scheme is so slick and practiced that no one whom he robs realizes that things are missing. They are the professional, richer people who do not know that five tomatoes are gone from their larder or that one bottle of glass cleaner is somewhat diminished!

Martin maintains files on each client as he calls them, has photographs of before and after the robbery and "cases" each house carefully for weeks if not months before actually committing the robbery.

The twist to the story is that Martin feels a somewhat benevolent guardian angel attitude towards his clients and feels that he has to help out in situations where they could be in either danger or facing a problem. This involves going against all his tried and tested rules and methods but he breaks all of them in order that a client is protected. Martin does not feel that what he is doing deliberately hurts his clients or that it is wrong.

The story for me was how a person used to a high degree of  planning and method can certainly change to one of spontaneity and realize how much fun he can have with that way of life as well.

Alex and Rachel come to Oxford for a gathering where Rachel is brutally murdered. The case drags on and though Alex is initially a suspect he is immediately released. Coming back to Oxford later in the year Alex tries to piece together the events and circumstances and the friends who surrounded both of them on that fateful night and come to some kind of closure on the murder. The police are not even close to solving the murder at the time.

Harry who was Rachel's mentor offers surprising information not just of Rachel but of the two other undergraduates who were mentored by him and on the other hand we have Rachel's rather strange godmother Evie whose story and support of Rachel changed over the years rapidly.  We also have Antony and Cissy Rachel's erstwhile friends who shared not just their mentor Harry but also a lesbian relationship between Cissy and Rachel.  Antony though desperate to be part of this menage de trois was never allowed to be part of the scene.

Using these basic four characters and their past lives as well as Harry's commentaries on what is happening now, Alex uncovers a life that he wishes he did not uncover and secrets he would have preferred not to know.

Alex is a solitary person and after having had a wonderful relationship of love, warmth and companionship with his wife Rachel, this is suddenly taken away. The feeling of loss is immense and the loneliness total.