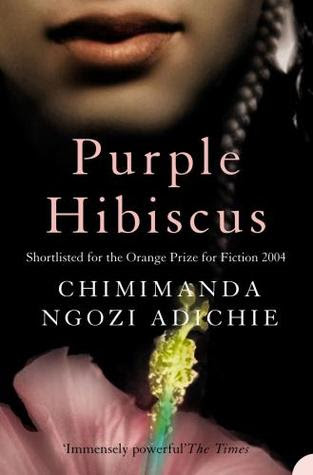 I knew that there are parents who want to control their children but Eugene takes first prize. Both Jaja and Kambili are scheduled to do what their father wants and this starts and ends with prayer. Apart from prayer, study, sleep, there is very little time left for any fun, and although a TV and Radio are in the house these are off limits.

The sad part is that Kambili is not even interested in rebelling or even adventurous enough to know how the other side lives but of course this state of limbo does not last long. A visit to Eugene's sister opens another world - a world where everyone can freely talk, and no one will listen. It is a strong contrast to the pristine, almost clinical atmosphere in Kambili and Jaja's own house where only Eugene talks and the others are allowed to reply. Jaja's initial rebellion is met with dismay on the part of his sister, and retribution by his father.

Punishment by Eugene for mild refractions would be considered abuse and Eugene gets away scot free because his wife does not have the courage to stand up and protect either herself or her children. However, Eugene is considered a pillar of his society, a patron of both church and charity cases and someone whose largesse is given freely to all and sundry.

This was a quick read and I liked it very much. The lines between childhood and adulthood what is right and wrong, different ways, different worlds are all brought together very well in this novel.

I am hoping that with the newly weds more out of the house than in, that I could get on to an even keel now! read more hopefully.

"Things started to fall apart at home when my brother, Jaja, did not go to communion and Papa flung his heavy missal across the room and broke the figurines  on the etagere. We had just returned from church. Mama placed the fresh palm fronds, which were wet with holy water on the dining table and then went upstairs to change. Later she would knot the palm fronds into sagging cross shapes and hang them on the wall beside our gold framed family photo. They would stay there until next Ash Wednesday when we would take the fronds to church, to have them burned for ash. Papa wearing a long gray robe, like the rest of the oblates, helped distribute ash every year. His line moved the slowest because he pressed hard on each forehead to make a perfect cross with his ash-coloured thumb and slowly, meaningfully, enunciated every word of "dust and unto dust you shall return".

Taken from the book PURPLE HIBISCUS by Chimamanda Ngozi Adichie. My first read of this author.

Joining Diane at Bibliophile by the Sea for this meme.

Mailbox Monday hosted by Notorious Spinks for this month.

The only book I got was borrowed from my son (am reading it when he is not!)
INFERNO by Dan Brown.

Hosted by Sheila at Book Journey.

Reading the above. Liking it!!


On a non book note, just getting back into stride after the wedding! Couple still here with us and travelling around the country.

DAUGHTER OF JERUSALEM by JOAN WOLF 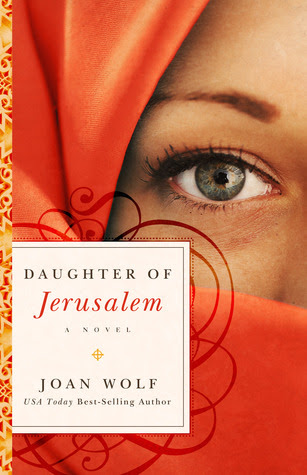 This was a win from Noelle at Live a little Dream.

Mary of Magdala commonly known as Mary Magdalene is a well known if slightly controversial figure amongst Catholics. Favoured by Jesus, looked askance by many of the local populace (her past preceded her) she overcame all obstacles and used her skill, intelligence and wealth for the betterment of those who were not so well off and very importantly did it anonymously. At a time when the priests in the Temples seemed only interested in money making and making more money, Mary of Magdala stood out as someone different. No small wonder she had a special bond with Jesus.

I enjoy history in all its forms so this book was ideal for me. Set at the time of Jesus's birth and his time here on earth, the chronicles of the Romans, their position in Jewish society and how the Jews wanted so badly to get rid of them is also very much part of the story and the history of Jesus and Mary Magdalene.

The over riding fact that I derived from this story is that Mary had unshakeable faith.  It never questioned Jesus's actions or his reactions. Each of his disciples including his step brothers questioned the validity of his actions or asked him to justify his decisions. It was only Mary who never questioned, never faltered in her faith.

Good example for a lot of us. Not relating to this faith per se, but to have faith in whatever we trust.

This was a win from Judith at Leeswammes. Such a nice read. It deals with topics which are heavy - loneliness, bullying, living in a loveless marriage but somehow the subject matter is treated lightly and you don't feel an emotional burden whilst reading about them.

Two main characters - Carol and Albert who never meet each other. Carol writes letters with no address and such letters are binned at the post office. Albert works at the post office and is almost due to retire when he comes across the envelope with the smiley face.  He surreptitiously takes one, then the next that follows and the next and he somehow finds out where Carol lives. It brings her character somehow closer to him

Albert through Carol's letters finds the courage to stand up for himself and be more confident about facing his retirement. He was dreading it wondering how he was going to live the rest of his days without an occupation. For Carol putting thoughts on paper put her whole problem of both husband and daughter into perspective though she never actually solves her issues. Maybe that is why we are told to write down everything - be it problems or lists!

A photo taken of my daughter and her husband in Ghanian dress. Her husband is from Ghana.  I liked the headgear. All intricate pleats! 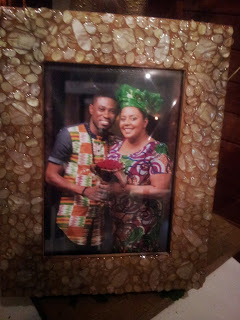 My mailbox is empty!

And the reason for the slowness is! 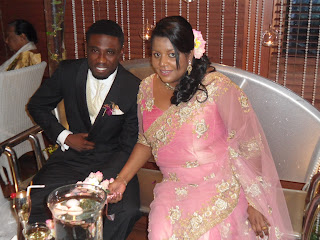 The wedding went off very well. The bride looked lovely (but that's the mother in me) bridegroom looked smart and everything went according to plan.

THE ORCHID HOUSE by LUCINDA RILEY

Spanning decades from the 1930s and war torn England then going across to Thailand with glimpses of Singapore the book covers a family or rather two families over several generations.
How the lives of two separate families intertwine, separate and meet up generations later makes up for a spellbinding novel.

The story starts in the now - with Julia a renowned concert pianist who has suffered devastating loss and is just existing on a day by day basis unable to come out of the shock and also not wanting to come out of the depression which is holding her down. We have a loving sister who is trying in whatever way she can to help, and we then have the Crawford family who have always been part of Julia's family going by generations. Kit Crawford is trying to salvage his inheritance or what is left of it and whilst selling the estate Kit discovers an old diary and takes it Julia who takes it to her grandmother who is the only person who will be able to help unravel the story.

This is the part where we go backwards in time to Kit's grandfather who became a prisoner in the Far East and to the story of his life there and his love and the ramifications of that love affair which has now reached the present times.

I do so like family stories and this was by far one of the best. Told in very descriptive form not just of the geography of the land it covered, but also of each and every character the reader is swept into the story and you are hoping against hope that there will be happy ending for all.  Obstacles in Julia's way there are aplenty and this adds to the tale.

A book I thoroughly enjoyed reading.

My reading is still going on despite hectic wedding preparations! I try to read even twenty pages at night and sometimes even during the day whilst waiting for my daughter at various places!

The book I have started and which I am thoroughly enjoying so far is a win from Leeswammes.

This is a classic opener.

Carol wants a disease. Nothing deadly and nothing crippling. She doesn't aspire to disabled parking, for instance, despite its obvious advantages.

I doubt anyone could beat this one!

I expected much more from this travel memoir. It is an experience to step out in your fifties - leave your safe little world behind, take a step into the unknown and travel around the world for a year and on top of that back packing and in student hostels most of the time, using public transport and eating cheaply to make your money last.

The book covers all this but it was tame reading. I never felt excited however tricky the situation got or how interesting the place was and believe me she did go to interesting places.

I did finish the book though I did find it dull throughout.

Going back to the wedding, bridegroom has also arrived from Ghana with his mum. They had major problems with his visa and now we can all breathe again as its sorted out! Now its one task after another hoping everything falls into place on the big day!

MAILBOX MONDAY - IT'S MONDAY! WHAT ARE YOU READING?

Mailbox Monday is being hosted by Notorious Spinks.

Two books which came into my house were wins!

A win from Noelle at Live and Dream a Little

A win from Judith at Leeswammes.

Hosted by Sheila at Book Journey.

Halfway through this one and just liking it so very much.

That's it for this week!