the Scandal in Honor by Heidi Ashworth A Lord Trevelin Mystery 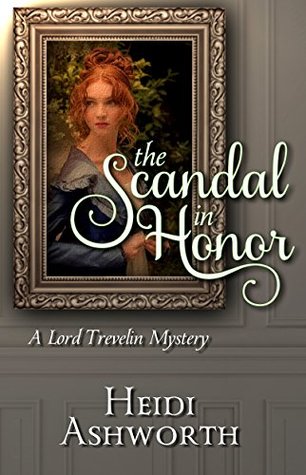 Honor has been Lord Trevelin's downfall. His penchant for looking into murders, missing jewellery has not endeared him to his future father in law who refuses to settle a date for his nuptials. He is not very happy with his future son in law despite his daughter's entreaties to set a date.

Now our Lord is about to be drawn into another mystery - one which does not bode well for his relationship with his fiancee, because the main person in the mystery is a young, unencumbered lady whose antecedents are a bit vague and whose presence in society is also not very certain.

Two sudden deaths in one household are certainly suspicious and the suspects are many. Lord Trevelin is involved in the pursuit of justice and in the end it is to his detriment because he is forced to give up his love as well.

A Regency era mystery which did not end happily ever after sadly but was an entrancing tale nevertheless.

Sent to me by Netgalley for an unbiased review, courtesy of Dunhaven Place Publishing.
Posted by Mystica at 10:55 PM

I think I'd enjoy this!

Thank you for reading and for the review! I hope you will read the first book in the series, The Devil in Beauty, and the last when it comes out late this year or early next year. It is called The Murder in Mirth. I would LOVE to see your review on Amazon. :-)