The Lost Love Letters of Henri Fournier by Rosalind Blackenbury 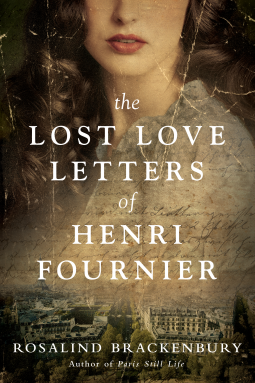 This was not just a very good novel. It had drama, romance, war, death and great joy and love as well. The elements were so well drawn into together and set in two different time frames that added to the drama of the telling of the story.

We have 1913 France - brilliant and carefree. At least these characters were. Claude and Pauline. Married tolerating each other. Each fully aware of the other's frailities. Then we have Henri young the Secretary to Claude whose attraction for Pauline grows by the day. Acknowledged by Pauline but not acted upon till halfway through the story. So we had a descriptive background of Paris and rural France as well. The lives of the well to do, the literate, the peasants. There was all.

Then the outbreak of war. Henri had to enlist and then so did Claude. Like all Frenchmen who were optimistic at the time - it was not meant to be. The war dragged on and womenfolk left behind had to fend for themselves. Pauline did not do too well. She was so frightened that this last chance of happiness was going to be snatched away from her. Henri himself a writer, had written a best seller and his future was very bright. Pauline felt that she was on the edge of a precipice and all that she had lived for was going. And it did. Henri lost his life very early on in the war. Pauline was rejected by Henri's family. She was just his mistress. The isolation of it almost killed her. She picked up the pieces slowly .


It is in the retelling of the bare bones of the story in 2013 that it comes alive. It is as if Henri and Pauline, and all the other characters are very much alive and present. It did not appear that Pauline was in her 90s, that practically everyone was dead and gone. The story is a common one for the era - so many wasted lives and futures but the author did a brilliant job of giving so much life to this very ordinary love story that lifted it from being just another love story.

I need to grab a copy of this for my mom.

I will have to read this one next year during Paris in July. Thanks for sharing the story.