Death of a Sacristan by Paul Barra 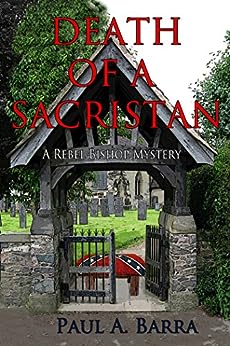 This was not a run of the mill mystery murder. We had plenty of history thrown in and not all of it of the palatable kind.

Bishop Lynch, Catholic and in the deep South of America owned eighty slaves. He was able to quote bible verse at every turn to uphold his belief that owning of slaves was right and just and quite equitable. They were not equal, they had to be directed and owned - they could not think for themselves (and at the time they were quite defenceless and quite without direction anyway) but it was a horrible way to behave. It was at odds with what his parish priests believed anyway. Into this atmosphere, a sacristan a pillar of the church was found murdered in the church itself.

Our junior priest has been formerly a police officer in New York and he uses his skills in trying to find who was responsible for this murder. It does not go down well with the local police chief who is very anti Catholic but who has many omissions on his side to hide as well.  The murder literally uncovered a can of worms ranging from the local police force being involved in every wrong doing possible from trading with the North (treasonable offense) to lynching of a Negro to intimidation of witnesses and to even attempted murder of anyone trying to uncover who was responsible.

The culprit was of course completely different and this was the lovely part of this mystery!

As I said the murder mystery part was just a small part of the book. History played a great and very interesting role.

Sent to me by Netgalley for an unbiased review, courtesy of Black Opal Books.
Posted by Mystica at 10:40 PM