Her Mother's Grave by Lisa Regan 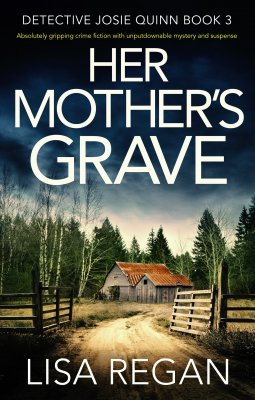 Josie Quin is chief of police. She reached this position after a very long haul. She also had an unheard of horrible childhood. Her mother was physically and mentally abusive and even tried to sell her as a child into prostitution. She however would not give up on the child, even though there was a loving grandmother waiting to take over.

Josie is now coming to terms with her life as an adult. She has lost her husband but is on an even keel. Till everything bad starts happening to her at once. It happens to all those around her as well and it is all put down to a big drug deal she busted and put influential men behind bars. The troubles still continue. Is someone trying to control her life from within prison walls.

When unrelated events start happening, pieces begin to click that it is her mother buried in the past who has risen again to haunt her and relieve her of everything she holds close - from friends, family and very important to Josie her career. Using blackmail and coercion to an unbelievable degree she forces people around her to do exactly as she likes.

This was a psychological thriller par excellence. The steps and connections were too intricate to be followed and had to be handled step by step. It is all co related and all linked but it took a psycho to be able to give reasoning to the fear, unhappiness, misery and loathing that Belinda aka Barbara aka Lila did.

Solving crimes and putting Lila behind bars was not the story. The story lay in the mental games undertaken by the killer and how detectives have to painfully follow the clues in order to prevent more killings taking place.

Sent to me by Netgalley for an unbiased review, courtesy of Bookouture.
Posted by Mystica at 9:20 AM

Interesting! It's different than what I've read lately.

This sounds intense - the mind puzzles can be fascinating to watch unravel. Thanks for sharing your thoughts.