The Beekeeper's Promise by Fiona Valpy 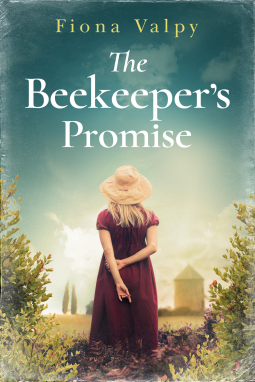 I did not intend to read two books set during the same era of WW1 and II but it just happened like that. As I said before each story is so different and so unique, it shows another aspect to these wars so each story is fresh and you do not get bored at all.

Set in two separate time lines, the story of Abi is of the present times and then we go back in time to the period of Eliane Martin and her family in rural France. Abi is slowly recovering from a breakdown of a disastrous marriage. She has the mental and physical scars of the marriage and she is trying to gain control of her life after many years. An offer to work at the Chateau Bellevue is just what she needs and she throws herself wholeheartedly into this new venture. The story of the Martin family, the Resistance in France, the inevitable involvement of the whole family in myriad ways under the very eye of the Gestapo in occupied France is a marvel to read.

Fascinating was the daily domestic trivia of trying to survive, of finding food and being permanently hungry. Getting the better of the Germans who occupied their country, whilst at the same time being unable to rebel but having to bow down before them was hard but secretly each one did what they could to help out their fellow countrymen in this dire time.

The story of Eliane, her sister Mirielle, her parents and the life of the entire village as well as the Comte whose Chateau was occupied by the Germans and everyone of these people who had to work for and with Germans was galling. They did so, only with the idea of having access to some kind of information which would be of use to their fellow men.

The story of loyalty is tested over and over again. You never knew who was the traitor within your midst so it was better not to know too much. A story of love which was tested over time in this story and a family which stays united through thick and thin. Abi's  survival is also well portrayed in this book.

Sent to me by Netgalley for an unbiased review, courtesy of Lake Union Publishing.
Posted by Mystica at 10:28 AM

I don't think I've ever read a book set in WWI or WWII but this sounds good. I love the cover!

I love books like this and always wonder if I would have been that brave.

I've read many books from the two WW eras and always find the ones set in France so interesting. Thanks for sharing about this one. I hadn't heard of it.