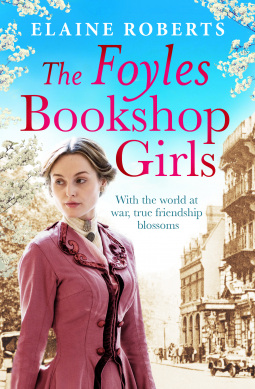 1914 London was a period of great change. For women particularly. Life was never ever going to be the same again.

Three young girls, good friends for a very long time worked at a bookshop. For one of them it was a necessity for the other two it was a means of securing a certain degree of independence in families where being independent was frowned upon. The men of the time, were finding it very hard to drag themselves out of a patrician outlook and in Alice's case particularly it was a very diplomatic road she had to trod to keep on the good side of her father.

Declaration of war with Germany changed life for everyone.  Everyone had a loved one enlist, it soon became compulsory and the hope that the war would end "by Christmas" sounded very hollow once the days went by.

Trying to keep your spirits up in the face of no news for months on end, the never ending of wounded young men returning from the front, in Alice's case having a baby whilst her husband was at the Front and facing the callous attitude of her father towards his sons put a strain on everyone's spirits.

The descriptiveness of life of Londoners in the face of bombing, privation, the rationing that seemed endless are all beautifully encapsulated in this story. It is a coming of age story in this case as well where these three young girls developed into mature young women seamlessly, despite the mental agonies each one underwent.

I am fascinated at how many stories are told about the Wars and each story is unique and so very interesting. Each one different in how it affected them and each one telling a different tale.

Sent to me by Netgalley
Posted by Mystica at 10:04 AM

I always think there can't be any more WW1 or 2 story settings but it seems to be a favourite setting for many and I have to say I am drawn to this one.

I love this time period and I have to say the addition of the charms of a bookshop make it sound irresistible.

This sounds like a good one. I am always drawn to titles that involve books or bookshops. :-)