The Foolish Gentlewoman by Margery Sharp 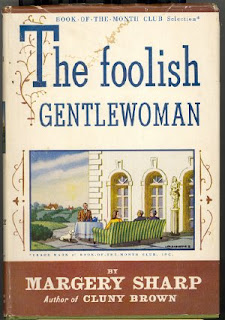 Set in the period after WWII I do so like the pace of this book. Somehow in some strange way it slows you down, gets you to think of how and why people acted the way they did. There is no frenetic need to get things done, to finish the list, to just rush.


Dealing with Isabel - gentle and mild on the surface but obstinate and stubborn to the core when she decides on something, her brother in law Simon ego centric and self assured and thinks he knows best for not only himself but for the entire family and Tilly a sort of distant relation who becomes the entire focus of the story with minor characterizations by Humphrey a nephew and Jacqueline another companion and the Poole's quite different to the normal live ins of the time we have a mixed bag of people living together in a rambling house in the suburbs of London.


Isabel as a young woman feels that she has cheated Tilly of marriage by hiding a letter written by a young man with a proposal of marriage. At the time Isabel was engaged to Mark but she was slighted by Macgregor's indifference to her charms and she thus hid the letter. This has troubled her since (going over decades) and now she seeks restitution. She intends gifting her entire inheritance of 40,000 Sterling Pounds to Tilly to do as she wishes. She on the other hand intends going into a home or hostel or lodgings as she blithely says never having lived like this and not knowing what it is going to be like.


Simon is furious at this turn of events but Isabel is implacable in her decision. The question is only when and in this the timing of when the declaration is going to be made becomes very much a focus and climax of the story. Tilly is invited for a spell and turns up but the Tilly that comes is not the Tilly of yore. She is brash, hurtful and nasty. Vicious almost and turns the quiet, contented spirit of the house into one of tension and disarray. Even Isabel with all her good intentions knows that Tilly is not quite a nice person and is troubled by this but does not turn from her original intention.


The story is about the vagaries of human nature and how some people like Tilly get the most vicarious pleasure out of the misery and unhappiness caused by them to others. Very pronounced in this book. Isabel on the other hand though a bit wishy washy is also determined on some issues and Simon crabby to the last has no say at all in what she decides to do despite him feeling that he is somehow the head of this household.


The book did not have the pleasant ending I expected. This is however an author I will go back to again after a spell with more modern reads!


I read this after reading a post on Fleur Fisher and I am very glad I did. If anyone would like recommendations for really good books set in a much earlier era this is the blog to go to!
Posted by Mystica at 12:30 AM

You wrote: "it slows you down"and then went on to say There is no frenetic need to get things done, to finish the list, to just rush." I crave fast paced books often, but sometimes I really want to--need to--settle in with something slower that reminds me to settle in and slow down for a change.

This sounds like a good read even despite the unexpected unpleasantness of the ending.

I like books that make you slow down as well. This sounds really good.

I really love her 'Cluny Brown', so this one has gone onto my wishlist now.

I read The Nutmeg Tree, which I loved, and am slowly working my way through Margery Sharp's books.