SUSAN SALLIS - DAUGHTERS OF THE MOON 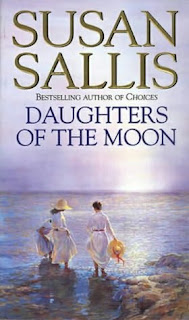 Miranda and Meg twin sisters who are also by some means known only to them able to understand and actually feel the other twin's pain/joy/feelings whenever something is right or wrong or intense.  Miranda is the free spirit who seeks to follow the world of her parents in the acting field whereas Meg is the quieter one, the staid one who wants to make a name for herself as a painter.

Strangely enough it is Miranda who is forced to settle to a life of domesticity - husband and three children and a home life which for her is at times frustrating and annoying and which makes her fractious almost like a spoilt child. She turns to Meg to calm her down and although Meg feels put upon, her nature is such that it is unlikely that she will not make a stand for herself and allow Miranda to handle her own affairs however disastrous the outcome.

At the end Meg strikes out on her own and is met with unexpected success whereas Miranda is dragged down further into domesticity and a husband whom she no longer feels anything very much for. Violence and tragedy follow Miranda,  and Meg has to take the brunt of it on her shoulders merely for being her identical twin. Meg is finally able to make some sense of her life, turn it to her advantage and try to becalm her turbulent sister who would otherwise be totally adrift without her twin.

A strange read this was for me. I would have felt very uncomfortable having a sister or having any relationship which was so very dependent on one. The responsibilities forced on Meg were unfair though  Meg was not the complaining type. She just accepted it as part of her fate to be the one that was put upon, and the one that had to get her sister out of trouble. Her love was without limits, her sense of responsibility was the same. There was no sense of doing anything else other than what was right for everyone.

My second read of Susan Sallis. The first was a family story of three sisters, this was again family though very different.
Posted by Mystica at 2:01 AM