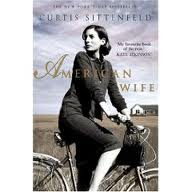 Based I think on the story of Laura Bush we have the story of a girl from  Wisconsin who lived a quiet life as a children's librarian and who was more than happy in her job, delighting her small charges and herself with her books and her gradual rise to becoming America's First Lady.

The road to the White House could never be easy and it is very clear from this story that your life comes under the microscope not just in the States but worldwide. I was surprised at this. I thought finding out trivial details of what the First Lady did or did not do would be of interest to US citizens but why on earth should it be of such great interest to someone in Croatia for instance was beyond me but reading the book one does realize that everyone seems to want some part of the action and however little their connection to the White House may be, if there is some kind of connection even  if it meant being a mother of another third grader when the First Lady was also around is enough to make a story out of it!

Though it is said that it is based on Laura Bush I finished the story looking at it as a memoir of Alice and Charlie Blackwell and not the Bush's. That was fine with me because I was interested in details of the American system of politics (of which I know little). The constant media hype, the continuous service oriented projects that the First Couple have to go to, the numerous photo shoots, the meeting and greeting of countless people were all of interest to me. The job is no sinecure and as said in the book you do get first class service and you do get to go to interesting places but your life and time is never ever your own.

The strange part of the book is that throughout the story the First Lady is seen as one of charm, hard working, and a calm and collected person. Charlie Blackwell is looked at mainly as crude, a buffoon, someone who has to be guided at all times as he does not seem to know better. Alice is seen as educated and able to hold her own. Charlie on the other hand is helpless and a bit of a dunce. Even  in times of great stress Alice is able to decide for herself what she should or shouldn't do according to her conscience and not to up ratings or popularity whereas her husband seems to think otherwise.

The book was complex and interesting. For anyone wanting to know details of how things are done in an American Presidency this would be good reading though since it seems to relate to the Bush's it is out of date. Nevertheless a very good read.
Posted by Mystica at 4:55 AM

This does sound like an interesting book just for a peek at the Presidency.

Excellent review. I always wonder if the First Family ever gets more than a few moments totally alone. I can't imagine living as they do.

I've been shunting this book because I don't really care much about american presidents. :-)

Your review makes me think I might like especially the beginning of the story, but I'm still not interested in her life as a First Lady. So, maybe not for me. Great review, though.

I would hate to be a political wife - they can't do anything right. If they carry on working, they are judged, and if they give up work, they are too old-fashioned.

I enjoyed this but I don't think it is Sittenfeld's best. Prep and The Man of My Dreams are wonderful books. She is a writer to watch, I think.

I didn't like the book at all, can't continue with it. I thought the story and plot was a little immature and frivolous. Ditch it mid-way!