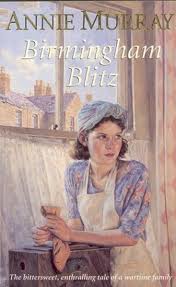 Though this cover says Birmingham Blitz, the book I have includes another book of Annie Murrays' Birmingham Friends. It took me some time to read as it was quite a chunky one.

The year is 1939 and Gene is a happy go lucky girl in a rocky household. With the war and with men being mobilized Gene's mother finds other avenues to keep her happy to Gene's dismay and sadness. Gene is loyal to her father who is very much in love with her mother and she knows the heartbreak that will happen when he does return and finds his wife gone with another man.

We also have Teresa who is Gene's friend and who being of Italian descent becomes one of the "others" and the treatment meted out to them as a family for being different.

More than the war the book is about the effect it had on family life, the changing of values, the upsurge in women power with more and more women going out to work and having to take charge of families and futures. It also shows the tenacity of people to survive and despite all the destruction and turmoil how hope for the future was not diminished.

Anna has grown up with stories from her mother of her glamourous friend Olivia and her only regret is that she is not able to meet this friend. After her mother's death, she finds that Olivia is very much alive and the story goes on from there.

However a great deal of the story is of Kate and Olivia's trial by fire friendship from little girls to adulthood and the difficulties of loyalty and friendship amongst two such very different families. One working class, down to earth and straight talking and the other rich, smooth and hiding secrets that no one was supposed to uncover. The trauma of Olivia's childhood forms a greater part of the story and her loyalty to her family in not talking about this even to Kate who is the person closest to her. The effect that this has on Olivia right to the end is not surprising. Kate and Olivia choose different paths during the war - Kate to be a nurse and Olivia to be a typist in a government office and the two paths do not seem to cross for years.

We then find them crossing once more with Anna and Olivia meeting up and Anna for a time entranced by Olivia the same way her mother Kate was. How Anna extricates herself from this tangle is the second half of the story. This  second story also highlights not just how asylums were run (very badly) but also the attitude of the people to them. People presumed all those in one were lunatics but I understood from the book that many were not, they may have had a breakdown of some kind and were categorised as such which was so very cruel.


Both books dealt with the War and its effect on people - the period is one I like reading about so this was good for me.    Apart from the actual facts of the war the effect of it on the people itself, the daily striving to live was the part I particularly enjoyed reading about.
Posted by Mystica at 8:30 PM

These both sound interesting. I also enjoy reading about the peole during these times too. The second sounds prticularly fascinating to me as I have a particular interest in books which deal with asylums in ages past. Thanks for the review!

These books sound right up my alley, so I thank you for bringing them to my attention! It's fascinating to see how people on the homefront were affected by the war.