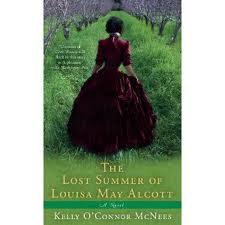 This was a book win from Molly. Thank you for a book which was not just delightful to read but also so very informative as well.

Set in 1855 the author takes all the history that we know of the Alcott family and mixes it with a bit of fiction to create this story. Like Little Women (which most people attribute to the Alcott family) did Jo have a Laurie in real life and was there someone in Louisa's life who inspired her. Someone who was able to accept the so different Louisa from the convention bound, insipid young ladies of the day. With Louisa's views on feminism, abolition, slavery, and the general position of women in general she was not of the commonplace variety of young ladies found during the period. Hers would definitely have been one of struggling for submissiveness in the face of so much male oppression. Poor Louisa.

Bronson (Louisa's father) was a philosophizing fool. He did not seem to care for the welfare of his family, what they ate or drank or what they wore. He did not believe in working and how he imagined his wife and children managed is not to be imagined. He felt he was always right and never tried even in small ways to make the life of his children or his long suffering wife better.  With the family on the move again, Louisa decides to make her plans of moving to Boston and carving out a niche for herself. Her plans have to be put on hold because of tragedy which overtakes the family and it is only after a protracted spell that she is able to get away and start on her new life and career.

The book was interesting in that it described very much the life of the period. From day to day activities of the routine washing, cleaning and cooking to the picnicking which was the fun of the day. However, it was sad reading for me personally. I would hate to live in a time which was quite oppressive to women and even reading about the trials of Louisa, her sisters and specially her mother was an ordeal for me!

The book was a very good read and very descriptive of the Alcotts and the period in history.

I really enjoyed this book and got to go to an event for the author. She really did her research before she wrote it.

I found this book enjoyable too. I found it interesting to see how far we have come as far as our treatment of women!

This one sounds like a good mix of history with fiction.

Sounds as if it is well worth reading for the historical side of this novel! On the list of course!
I duly noted your mixed feelings about the male domination...Raised in a nation where women are given equality with the other sex, I hated the notion of a 'second class citizen' in all its forms. I have long ago realized how very lucky I was...
All the best,

This sounds very interesting, thanks for the recommendation :)

Glad to see you really enjoyed it. I've had a copy forever, but no idea why I haven't read it yet. Sounds like I really must make time.

Glad you enjoyed this book, I did too.

I thoroughly enjoyed the way McNees blended the reality of Alcott's life with the stories in Little Women. Glad you enjoyed it, too!