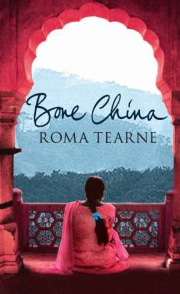 I never wanted to read this book whilst the civil unrest was going on in my country and it is only now that it is well behind us that I feel that I could read this book. The civil war is very raw still in my mind though most people try to put it behind you - the heartache that it has caused cannot be forgotton and the effects of it will be there for generations specially for the families who have lost their loved ones to emmigration.

Dealing against I would say a backdrop of the civil violence which beset Sri Lanka for decades this book deals more with a family trying to deal with such a different culture in England rather than the unrest itself. Immigrant stories are always human ones - and though I've read countless ones they always tug at one's heartstrings as there is so much going on and so much that one could empathize with.

This particular story deals with a young family of a very comfortable background - upper middle class in Sri Lanka who leave so that they could avoid the violence which they know is coming very fast. Trying to settle down in urban England and for Meeka specially after being the pampered baby of the family trying to settle down in a suburban school was at the beginning a nightmare. Calling the lunch ladies servants would never have got her on to a good start but she is the one who finally integrates best into English society.  The entire family of characters is a bit strange and stylized. They take a lot of things for granted in Sri Lanka but thankfully don't take that attitude to England as well and try to make the best of what is for them a bad situation. The older generation can never be completely happy I guess because they are perpetually harping back to what was rather than what is and having one foot on either side of the divide does not help when you need to settle in fast.

Maybe today the story may be different. Immigrants are more aware of what they are going to find and I think most people who emigrate do such a lot of research into what is their future that they may be more aware of their "adopted" country than the people who actually live in them.

The matriarch of the family leaves her bone china (the only thing of value left behind after her husband gambles away the family fortunes) to her daughter in law in trust for her grand daughter. The thinness of the china is delicate and fragile and seems to be the way life is - it survived the journey to England intact and is handed down to Meeka. Fragile but tough enough for daily use. A question of survival perhaps?
Posted by Mystica at 4:03 AM

This must have been a difficult book for you to read, so I appreciate your thoughts on it. I think it's one I would like to read.

Sounds like a tough story -- even for me, but for you I'm sure it was even tougher. I enjoyed that you shared so much with us.

Thank you for sharing with us what must bring back many difficult memories Mystica!
How quickly we forget such unrest, thinking that it is not happening to 'us' after all...
A book title to remember and thank you for a very good review!
Hugs,

I love the look of Bone China! LOVE the cover!

I love immigrant stories - I think because my grandparents immigrated to this country. They really knew nothing when they moved here, but I agree with you that most immigrants are better prepared these days. I love the title and symbolism of the book.

My parents are immigrants and I can always relate to such stories. I'm sorry about the effects of the civil war on your country. I have this book and I plan to read it.

I will keep an eye out for Bone China. My favorite read last week was the audio of On the Beach by Nevil Shute. Please come see what else I'm reading.

I've read two of Tearne's books and have had this one for a while. I find it difficult to read about this subject too, but feel I need to read it to try and understand what had happened.