Henry James - THE PORTRAIT OF A LADY 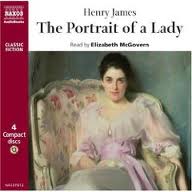 This was not an easy read for me. For one thing my pet peeve (the font) was terribly small and I find reading at night difficult with small fonts. I complain about this constantly but find no other blogger grumbling about this!!!

The story deals with Isabel Archer who is unexpectedly left a fortune by her uncle on his demise with the idea that she will find her destiny and her life as a result of the windfall. Isabel is of an independent mind even before this money finds her way to her and it was hoped that she would use this for her own betterment.  The story continues with Isabel's sojourns in Europe complicated with rejected suitors, lovers, a finding of a husband and a step daughter and the added complications of women who have vested interests in Isabel's life.

The book is a heavy tome and some of the writing is rather complicated and in fact stilted. I did wish that the author could get to the point sooner rather than later. It was only after the midway point of the story that I was sufficiently interested to finish the book. A redeeming factor is however that the characters are very human - no one is without flaws and this is very much shown up in the story where each person has a mix of both good and bad characteristics which brings the story more down to earth.

The book is slow so it will suit people who want a slower paced novel, who enjoy a story slowly unfolding. It could drive you nuts if you expect results quickly!

For me it was so so.

I actually really liked this book, I was surprised by how much! Of course, the font was a good size for me but I really enjoyed spending time in the world created by James even as I was frustrated with his decisions for Isabel.

I hear you on small fonts! Drives me mad - as I get older my sight gets worse. I rarely read male writers but next time I do I think I'll try James. Simply because I've heard his style resembles Austen's. Enjoyed your review.

I've only read The Bostonians by Henry James, which was very slow to read. Probably a bit like this book. It was interesting in a way, but I was tempted to give up.

I really hate small fonts. Books are a luxury (a necessary one of course) but small fonts just strike me as being mean. The book I'm reading at the moment has quite a small font and when I'm tired it certainly is a strain on my eyes.

I love the cover of your edition though! I haven't read this yet but think I have a copy somewhere. There are so many classics out there that I still need to read.