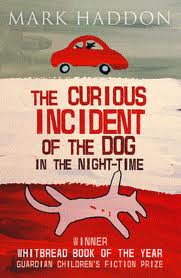 Of course I had heard of this title and it had featured in a blog hop which dealt with autism. My knowledge of the disease is very limited though there is someone distantly connected with us whose little boy has been diagnosed as autistic.

This book deals with Christopher who has Asperger's Syndrome or high functioning autism. On the one side you do know that you are dealing with someone who has a mental problem and on the other side you are dealing with a very, very intelligent young man who solves mathematical problems with ease and whose whole world (little though it is) is dealt with solely on logic. Christopher cannot understand simple statements like "a fat lot of good it will do" because there is no logic in the statement and he could not understand why people talk like this.

The story starts with a neighbours dog being killed and Christopher sets out to solve the murder. During the course of his trying (of course very logically and very clear step by step) he treads on everyone's toes, makes everyone mad and of course he cannot understand why he is doing this.

The book is mind boggling but does keep you on your toes. The chapters are marked by prime numbers which got me fascinated from the word go till I sorted that out in my own mind (which believe you me was not easy!). You see the world from both a child's perspective as well as from an adult's one. Because Christopher was not the average 15 year old we did see the world flawed as seen from his side and what you saw could not be simply explained away either. For Christopher things were what they were and you did not read into stuff matters which were not apparent. Tough world for both Christopher and his parents (whom I felt deserved all the support they could get).

A tough book to read but one which you have to finish once you get going.
Posted by Mystica at 8:25 PM

This sounds quite interesting; very different. Thanks for sharing your review thoughts.
Have a great week.

This book was so good! And I cried at a certain point too

I have Asperger's (and my son is Autistic) and funnily enough have not read this book yet. I do own it though. Math is not my thing and I think that is what has slowed me down in reading it but I do intend on getting to it one of these days soon!

May I kindly suggested, please do not refer to us as having a "mental problem" Autism & Asperger's is a Neurological Disorder not a "mental health problem". True, many with Autism/Asperger's will suffer from a comorbity (an accompanying mental issue such as OCD, anxiety) but those issues are their "mental problem", not the Autism. And some of us have no mental issues at all just the Neurological Disorder itself. Respectfully, Nicola

I have this one my bookshelf but have yet to read it. Your review got me more curious about the book.

The first time I read this was for book club and I did not get through it. Then last winter I tried it on audio and it was awesome :)

I really liked this when I read it. I found it very absorbing and I loved Christopher's attempts to figure out the murder and the world.

I also loved this book. It sounds like you went out and learned a few new things here, Mystica. Which is never bad!

I listened to this one on audio and I feel like I missed a bit. Your review really makes me wonder if I should pick up the print edition and see what more I can get from it. It truly is a unique story.