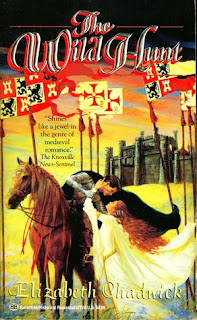 The story set during the Welsh March wars Guyon is ordered to marry Judith just 16 years old and terrified of marriage after seeing the treatment meted out to her mother by her father. On his side Guyon is angry that he is forced to marry Judith who he considers a child. Used to the charms of more mature women he finds her too childish for him.  What eventually evolves is a beautiful, mature relationship based on trust, deep affection and a kindness on the part of Guyon who knows that Judith has to be handled gently if they are to make a success of their marriage.

The background to the story is tumultous. It is a period of war - annexing territory without regard for any moral norms. Bloody warfare is rife and the kingdom is torn apart and every Lord has to make sure that he is on the alert for marauding tribes. Despite the constant warfare, the constant battle to maintain one's own territory and the fact that you never know whether your husband is going to return home in one piece, this book combines the best of history in violent times with a very tender love story. Beginning in 1089 a period of history in a time which was not very well known to me set in a very beautiful country this was a very interesting book.

I haven't read much Elizabeth Chadwick but am definitely going to keep my eye out for books by this author.

I love Elizabeth Chadwick. I want to try more of her books.

I have a few of her books on my Kindle but haven't read them yet. The reviews all seem to be favorable though. If you enjoyed it I'm pretty sure I'll like it too.

I'm so glad you enjoyed this one! I just ordered it from the UK so I'm anxiously waiting to receive it. Elizabeth Chadwick is a wonderful historical fiction author and I'm looking forward to reading all of her books. Thank you for the review. :)

I wasn't a huge fan of this one, but I love her more recent works, especially the William Marshall books. She's a great writer!

I haven't read anything by this author personally, however her books have received some excellent reviews.

Your book is the first part of a trilogy and Elizabeth has many other titles to her name.

Thought you might be interested in the link below, as it lists all of her books, in the order of publishing.

I remember that I hated the mistress when I read this book, of course it was not her fault

I love Elizabeth Chadwick, but I haven't read this book yet. I think she is the best writer of historical fiction out there right now. I need to find this book!

Glad to see you enjoyed this because a co-worker just gave me a different Chadwick novel, and I haven't read any of her books.