See What I Have Done by Sarah Schmidt 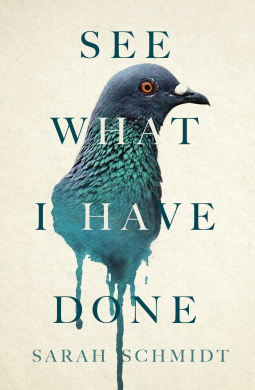 The opening line was evocative enough. I thought the ditty was just that but now I realise its based on true fact.

Lizzie and Emma are two spinster sisters from an affluent household. A father and a rather scheming step mother and a maid comprise the main characters. Brought up without any love or affection the two sisters are different but close by ties of blood alone.

Finding her father's body brutally murdered, Lizzie is almost clinical at the very onset. Finding her step mothers body as well just added to the cold bloodedness of the murders. Taken in for questioning eventually Lizzie is released but questions remain. Both sisters wanted their independence badly which was being denied them. Was that the reason for getting rid of the impediment which held both back. Lizzie and Emma sought different things but both knew that obtaining it was almost impossible.

Lizzie is almost child like in her mannerisms, thoughts and behaviour. But the fact is that there were two murders and finding out who did it was the crux of the novel.

A rather unsettling story which highlights once again that you never know the depths of the human mind, and what each of us is capable of doing or not doing.

For a debut novel, this was amazing.

Sent to me by Netgalley for an unbiased review, courtesy of Grove Atlantic.
Posted by Mystica at 10:06 PM

Not sure if its for me. Perhaps if I belonged to a book club as it sounds like I'd want to discuss with others.

You've really piqued my interest with this one.