Mad for the Marquess by Jess Russell 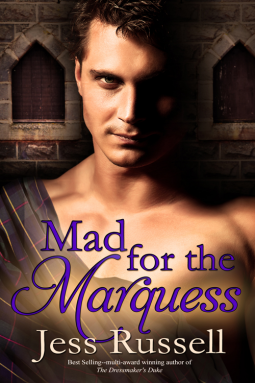 Though I started this read initially thinking it was going to be a light hearted, sensual romance between a prim governess type girl and the dashing Marquess, this was anything but.

It came as a surprise that within the romance that evolved between an understanding woman and a much maligned man (Marquess though he was), the real story is about mental asylums in Britain where a soul could be thrown into and completely forgotton as it was an embarrassment to the family to have anyone even tainted with the slightest hint of madness as they called it.

Devlin was found covered in blood - and the murder was most gruesome. He has also lost his memory and so his father as a form of treatment has assigned him to Dr. Hives at his establishment to try to "cure" him and bring him back to sanity. In shackles, purged, bled and drugged Devlin does not know most of the time what he is, where he is or what he did.

The arrival of Anne Winton is the turning point in both their lives. She herself has had a very raw deal. Orphaned and then in an orphanage where she bore the brunt of bullying just because she was different she is aware that the slightest bit of showing that she is "different" would mean that she will be thrown out of this establishment as well. She has to tread very carefully amongst many treacherous staff and also try to effect some form of healing for its inhabitants. Her gift of healing can be a two edged sword and despite healing many, she can also be called out as a witch with its own horrors.

The story outlining treatment of the insane, the mentally depressed and also the homosexual was very depressing but factual. Sadly you realise that so many would have just faded away in these institutions forgotten by all and ultimately becoming raving mad through no fault of theirs.

The romantic part of the story however was quite interesting and very sensual which added a certain amount of piquancy to an otherwise brutal story.

Sent to me by Netgalley, for an unbiased review, courtesy of The Wild Rose Press Inc.
Posted by Mystica at 7:41 AM

The cover of the book is appealing.

Ah love the premise of it but not sure I'd want to read the brutality parts.

Hi,
Sounds like an interesting book. I'll have
to check it out. Thanks for stopping
by my place. Have a great day!