The Fire Child by S.K. Tremayne 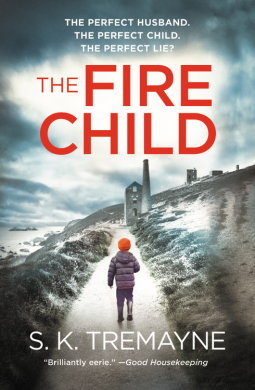 Rachel and David both enter a marriage with deep, dark secrets. Each have their own agenda but one thing they do have in common. They want whats best for Jamie the little boy left bereft after his mother's tragic death. Carnhallow House where David takes Rachel to live is an added bonus. On the coast of Cornwall, it does have a tragic history with tin mining taking precedence but it has been the family home for David and his ancestors for generations. The fact that Rachel fell in love with the house as well was a real bonus.

Nothing however is what it seems and the onset of strange utterances from Jamie with disjointed unrelated stuff from David's ailing mother makes Rachel begin to think that Nicola's death was not the straight forward accident it seemed to be and Jamie seems to have some vision for the future which does not bode well for Rachel.

Taking twists and turns of the most unexpected, the depths to which someone would go to safeguard a "thing" in this case Carnhallow House over a relationship and an actual living being shows what attachment and in a sense greed could do to a human. Not being too attached to worldly stuff is something that Buddhism always speaks about and I guess this is a good thing.  David considered Rachel expendable in the greater scheme of his life when compared to his family home and this overall affected the entire story.

A mystery it was, but a psychological saga would be more descriptive of this very good book.

Sent to me by Grand Central Publishing for an unbiased review, courtesy of Netgalley.

I like psychological thrillers too, especially with such a cover and title.