A Knightsbridge Scandal by Anita Davison 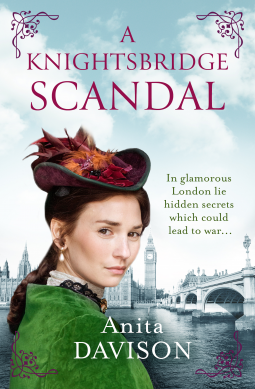 1903 is a good period. A period of great change particularly for women with the beginning of the suffragette movement though it still had a long way to go. Attitudes of men were also changing albeit slowly.

Flora our heroine has come to London seeking out her father whom she has never met nor been acknowledged by upto this time. All along she thought herself the daughter of the butler, a governess by profession and was looked at condescendingly by all including her mother in law. Her husband thank goodness is a perfectly decent man.

Flora is as her wont goes slap bang into a murder and a mystery which will take her to the very highest in the land. The ramifications of a murder which was thought first to be a robbery gone wrong, then linked to the victims connections to the suffragette movement move steadily upwards to a Serbian gang operating in London right under the eye of the very highest.

Very descriptive of not just the mystery and the murder it was, but also of the life and times of the period and London in particular, this was a very good piece of writing and one I enjoyed tremendously.

Many thanks to Netgalley for sending it to me, courtesy of Aria for an unbiased review.
Posted by Mystica at 2:00 AM

Sounds a bit different so I'm glad you enjoyed it!

I think this would be something for me

Looks like a great read for history and mystery buffs.

This sounds interesting. I do like a good mystery.