Crown of Passion by Jocelyn Carew 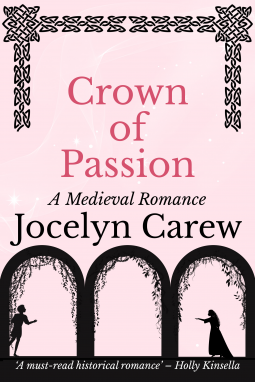 When one becomes a ward of a unscrupulous king one is at the mercy of his wishes. William II was one such king and Gwyn realised very early on that she would need all her wits about her to survive. It did not help that her guardian in this case was disoriented and did not care about her welfare. Her only concern was to survive herself and somehow protect her young son.

The court was corrupt and the advisors to the King worse. Gwyn found out that love had no place in the court and those who professed it only meant to please themselves or further their own place in the court. It was a bitter pill to swallow. She loved unwisely and had to rein herself in and not risk her life. As it is she lost her entire dowry to the greedy king who actually wagers her to the highest bidder. Seeking escape, escape she does but then ends up with a man who is worse than all of them. Married to him and with no means of escape she thinks this is her fate but fate has a strange way of upsetting everyone's plans and it ends well.

Love triumphs, good over evil and it was a pleasant ending to an unpleasant tale of avarice, men's over riding power over women and at a time where women were merely chattels of either their fathers or their husbands.

Sent to me by Endeavour Press, for an unbiased review, courtesy of Netgalley.
Posted by Mystica at 2:30 AM

I have not read a medieval romance but this story really sounds good, I assumed, with a solid plot and narrative.

Would hate to have lived in that time. Hope she found final resolution, hope and love. She sure met up with some stinkers.