The Bones of Grace by Tahmima Anam 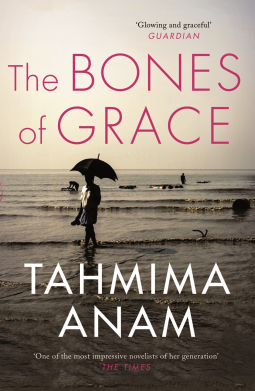 This was complicated in a good way. Eventually it made sense. Starting from the academia of Harvard we cross to Pakistan in search of an extinct whale who walked the earth, we then cross over to Bangladesh. Here we then come to the family saga story as well. Complicated again because the conflict of ideology between the old brigade and the young people, the identity crisis of who you actually are, trying to conform to traditional roles is rather difficult for Zubaida but she does try.

An archaelogical search to unearth something strange and unheard of entwined with a love story of Zubaida who is trying to balance the sudden appearance of love with the expected role which she has never said no to of being the bride of a family friend where they are just waiting for her return to announce an engagement. How does Zubaida reconcile the two? how does she think her role as wife in a traditional household will work with her career?

A conflict which is ever present for modern educated girls in Asia - where do you draw the line between personal desires and the desires of the family. Unlike in Western culture, in closed small communities in Asia it is the community that is important not the individual and how much is one willing to sacrifice for this. The story with the unusual theme of paleontologists, political upheaval, tribal warfare, love and family was beautifully told as it is always by this author.

Sent to me by Netgalley courtesy of Canongate Books, for an unbiased review.
Posted by Mystica at 6:38 AM

Your review has left me intrigued and really curious about this one.

Oh wow. This sounds like one I would really like. Thank you for bringing it to my attention, Mystica!

I remember liking this one too.

Wonderful review. I love how far we travel from our sofa.

Such an intriguing plot! Thank you for sharing it.

Sounds good! I'm intrigued by the archaeological angle, and mixed in with a story about traditional vs modern values- both storylines sound compelling! Glad this worked for you. It does sound like a good book. And I'd like to read more books set in Asia, including Pakistan and Bangladesh.