The Undertaker's Daughter by Kate Mayfield 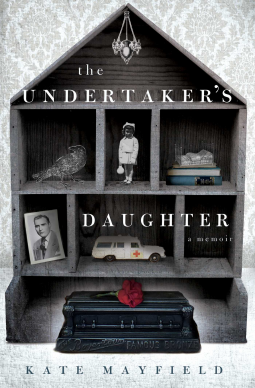 This took me right back to Six Feet Under. The tone of the book was very reminiscent of this but then this took a different turn.

Kate Mayfield is one of the children of a local small time undertaker and her memoir of growing up above a funeral home is a wonderful read for people who like good writing. Strong characters in the form of a father and mother whose word was law and an older sister who was slightly psychotic with two other mild siblings Kate seemed to be the curious one. The one who always wanted to know the whys and hows. Not discouraged by her undertaker father to understand the workings of the funeral home, for her and the other children death was very much part of their lives and nothing to be afraid of. They grew up with the notion of death coming to all, young and old and how their lives had to fall in line with the funerals which took place in the home because funerals governed the entire Mayfield family life.

Kate growing up in this environment, the attitude of those around her to her background and how she eventually leaves the small town of Jubilee to make a life for herself elsewhere is the story of this book. Her turbulent relationship with Evelyn one of her sisters and the very close relationship she had with her father despite his shortcomings which she got to know of only in her later teenage years are very descriptively told. Her mother and she seemed distant with her mother not really understanding or rather wanting to understand the needs and mind of the young Kate.

A family saga with Kate being the spokesman in this book a very nicely balanced story of how life and death live alongside each other.

The book was sent to me by Netgalley via Gallery, Threshold Pocket Books.

I really like the cover of this one. The story sounds interesting too. I am not familiar with Six Feet Under (I've heard of it, but never watched the show).

This was a great read wasn't it! One day I must make time to re-watch Six Feet Under too.

Stopping by to wish you a very Merry Christmas, Mystica! And may your New Year be blessed.

Thank you very much for your very sweet greeting Mystica. I hope you had a wonderful day and thank you for the review. It sounds very interesting

Going to have to keep an eye out for this one!