Friends and Relations by Elizabeth Bowen 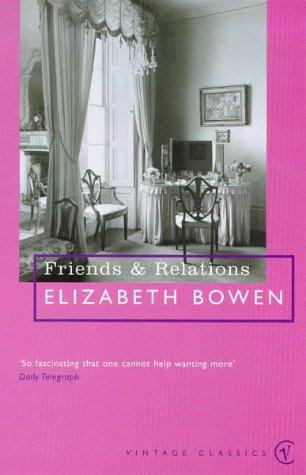 The book is out of print and the chances of me getting to this one was remote. Fortunately Open Library had it and I was able to read it there. Highly recommended on several blogs including Book Snob and Fleur Fisher,  I was very glad I was able to find this one.

The story deals with relationships between four families - it begins at the wedding of a young couple where we are introduced to all the parties that form the story. The scandalous Lady Elfrida whose only scandal was that she is a divorcee seems to cause uneasiness wherever she goes. Hovering over it all are the Thirdmans just returned from Switzerland, seemingly lost with their precocious daughter Theodora who even as a teenager is out to create trouble wherever she goes.

Soon after one wedding, Janet announces her intention to marry Rodney the heir of Considine who was the lover of the scandalous lover.  Despite initial hesitation over the match because of the uneasy connection between the families permission is granted and things seem to settle down.

Fast forward ten years down the line and we see the two marriages. Steadfast true but rather dull going on in a very dull way. Theodora however is still very much there on the scene, still creating tiny little rifts without even seeming to do so. Over it all is Lady Elfrida and despite her relationship with Considine being very much in the past, and ancient history, it is still the elephant in the room.

I like the way the author describes in detail the history of this particular time, the formality of day to day life is handled well. I found also excess of passion on one side and the absolute lack of it in other relationships in this story also an interesting feature.

My how times have changed - the book sounds like it's a peek into a time gone by.