A Season for Martyrs by Bina Shah 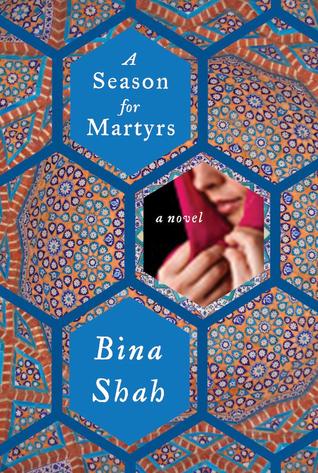 The story is told in two parts. We have the life of Ali a journalist for Channel 24 and then we have the imminent return of Benazir Bhutto to Pakistan from her exile in Dubai.

Both come from the same family of feudal zamindars of the Sindh community. Benazir Bhutto's father took his political leanings far and established a party which was at odds with the feelings of his community. He was for the common man, he sought land distribution (which did not go down too well with the people who owned land), he also sought the upliftment of the common man. For this he paid the ultimate price. His daughter took up the political baton and was set to  make wide sweeping changes. That this could happen in an orthodox Muslim country was in itself a massive story. That it actually happened is the fact.

Ali's life is also complicated. Involved in a love affair with a Hindu girl which in itself was a no no from both sides he knows that the chances of this love affair reaching its goal is almost impossible. His story that his father is dead just to avoid scandal is also not helping him or his family. His father has taken a second wife and moved away - he not acknowledging his father's existence is causing him more heartbreak than he imagined. The relationship between father and children has been distant and Ali as a young man is now feeling its absence the most. Ali has also secretly applied for a visa to the US and when this gets known to his family he is treated with suspicion because he did not disclose this to them. Trying to reconcile his personal life with the professional is also hard for Ali. He supports Benazir Bhutto but at the same time is skeptical about her aims. The corruption charges against the Bhuttos has not gone away and he is aware as do most of Pakistan of their enormous wealth both in Pakistan and abroad and he wonders how this came about.

The story then shifts to Bhutto's planned arrival in Pakistan and the events that preceded it. The dismissal of the Chief Justice and the breakdown of law and order was huge at the time as other than bringing in the military hard, there was no way for Musharaff to stay in power. Like most autocratic regimes the army was brutal and the death toll and the missing toll was very heavy.

A story of personal lives and political turmoil combined, alongside a fascinating slice of history and the development of a country goes alongside each other in this book.

Sent to me by Netgalley courtesy of Open Road Integrated Media.