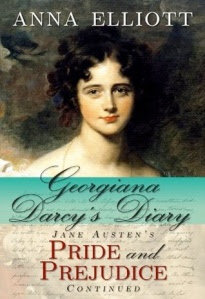 I've not read a P & P spin off for ages and am so glad I got to this one. It was such an interesting read. Simply told but with lots of twists and in the form of a diary very well written.

Georgiana is a very shy, reserved young lady. That is the picture painted in Pride and Prejudice. She herself is aware of this and feels that it is in lots of instances a drawback to her persona - she feels that she should try to be more like Elizabeth - forthright and able to say what she wants to say but she is intimated by her aunt the famous Catherine de Bourgh and even to a lesser extent by her brother.

Here is a story where Georgiana is the key character because she is telling the story but actually there are several characters who are part of the story - if I do say very much it will be a spoiler but believe me the surprises thrown up by of all people Aunt de Bourgh and Bingley's difficult sister! there is also the timid, ineffectual, sickly Anne who turns up one for the books and then we have the romance of Georgiana herself.

The time frame for the story was just after Napoleon was defeated and soldiers are now returning to England including Colonel Fitzwilliam who was injured during the encounter.

I enjoyed this book very much. I finished it in one go on a day trip out of Colombo - there is a sequel to this one Pemberley to Waterloo which I have to try to track.

I'm not big on Austen spin-offs but my mom really enjoys them. I'll tell her about this one.

This sounds like a book I would enjoy. Thank you for sharing it.

This sounds like a P&P spinoff I might enjoy and I usually don't much care for them.

I have these books but haven't read them yet, so I'm so glad to see you enjoyed it!