DAUGHTER OF TIME BY SARAH WOODBURY 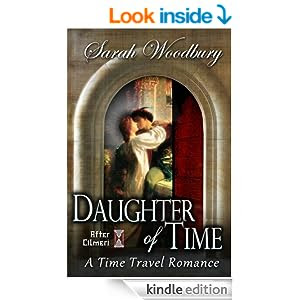 Meg seems to adapt very well to the 13th century and for Anna it is a breeze.  An independent, single mother in present times who had an abusive husband Meg relishes the support and care that Llewellyn offers. Her life in Wales seems one of just drifting from one day to another but of course this is a time of warfare and strife and Llewellyn has plenty on his hands with brothers and clansmen all trying to oust him from his position. Meg is an additional problem for him because he is constantly questioning whether she is actually from the future like she says she is, or is she a spirit of some kind.

Since Meg has had a very patriotic Welsh mother Meg is very updated on Welsh history. She is able to tell Llewellyn even the time of his death fourteen years further down the line! she is also able to tell him who and in what circumstances he will meet with his death. Llewellyn is a Prince without an heir and this has turned out to be a problem for him. Meg is able to assure him that with a second marriage he will get his longed for son.

Though in the style of Gabaldon there were twists in the tale which were different. Bringing Anna along with her to the 13th century was a definite twist and one that could perhaps have been enlarged on.

But he still have to marry...hm

This sounds interesting -- and I have it in my Kindle library so maybe I'll get to it sometime. :-)
Thanks for sharing your thoughts.

I will have to add this to my list of time travel books to read!

Mystica, I'm still waiting for your response regarding the date you want for the tour of The Gondola Maker.