FOLLIES PAST by MELANIE KERR 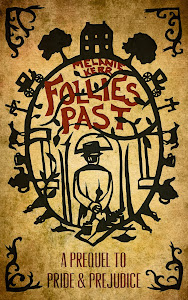 This was a variation which was very intriguing. Set one year before Pride and Prejudice came into existence, we follow Georgiana as she "comes out". There is a dear friend Clare who is also part of the story and we follow her to Ramsgate and London.

We have the infamous Wickham as well in the story, in cahoots with Mrs. Younge to persuade the young and impressionable Georgiana to run away to Gretna Green. How the episode is handled artfully by Wickham and his partner Mrs Younge and how Georgiana escapes this is the main crux of the story.

I was hoping that Elizabeth would be popping out even for a glimpse but it was not to be. Netherfield is still however on the horizon with Bingley hoping to buy a property in the area but that is as far as we go where Pride and Prejudice is concerned.

I am amazed at the creativity of authors who have taken the premise of Pride and Prejudice and done so many spin offs from the main story, each one as interesting as the last.

This does sound like a delightful story. Thanks for sharing..and enjoy.

And thanks for visiting my blog.

I know a lot of people who'd love that book!

Ooh a prequel is interesting! So many sequels but I'd definitely be interested in know what happened before P&P!

Thanks for the post! FolliesPast.com has information about the book and the author as well as 3 film-style trailers. The book is available in paperback and eBook at amazon.com/dp/B00GD76KJY