Serena is not really a good example of Regency England womanhood. Feisty, very independent, decided views, a temper and passion to match. Her father has encouraged her to be the son he never had. Following her father's death Serena is horrified to realize that the person her father has appointed as Trustee is the very person she had jilted some months previously.
Escaping to Bath to escape her father's heir and his taking over her beloved home, Serena ends up with a string of beaux and adventures in full.

Kitty is charming but without a cent to her name. Her guardian wishes to leave her a fortune provided she marries one of his nephews. The choice seems limited but their are two young men who seem suitable. Jack a gamester but handsome and Freddy rich and reliable.There is Hugo and Dolph both written out of the equation and so the adventure begins.  Kitty is attracted to Jack but in a fit of pique gets engaged to Freddy to get out of her guardian's house as well as to make Jack jealous.

Following adventures in London, including encouraging her cousin's marriage to another Kitty's story takes a happy turn.

Both books were read by me on long journeys - they are always light, refreshing and help me relax.

After simply ages I finished a quilt - this went to a baby girl Keziah who will take the quilt with her to Dubai. I really must try to quilt more - have finished several blocks but it is the putting it together which takes time. This is baby Keziah's quilt. I did a big quilt so that she could use it for a couple of years at least. 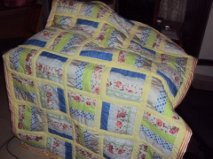 I like Heyer for an easy sweet read too. The quilt is beautiful!

What a pretty quilt!

You're right -- some of Georgette Heyer's books are light and refreshing.

I love the quilt, something I have never ben able to master.

I do love to knit and crochet, although I don't get enough time to really get stuck into a large project any more.

I do find the odd few moments to crochet basic blankets, which we sell in the charity shop where I volunteer. They are always very popular as either throws, or knee rugs for the disabled.

I used to read Georgette Heyer books avidly, but haven't picked one up for years. They always held a fresh twist on your basic historical romance story, she really was one of the best exponents of the genre.

Have a great week,

What a lovely quilt :D Yes you really should do more

The quilt looks lovely and yes, I agree, find the time! :)

I don't sew, but I can imagine that quilting can be quite a relaxing way to spend some time.

I love Georgette Heyer too. I've only discovered her in the past couple of years. But so far, I've enjoyed all the books of hers I've read. My favorite so far, THE TALISMAN RING. Hilarious.

Very pretty quilt. I am not very prompt when it comes to finishing my quilts. something I must work on.

Not only is this story light and frothy, it is also full of well written, funny characters. Kitty Charing is told by her step father, Mr.Pennicuik, to choose a husband from his great nephews as a condition of her inheritance of his large fortune. As she had always been kept under his close supervision, she is determined to spend some time in London, trying her wings in Society before committing to a marriage and so forces Freddy, the most affable of the nephews to take her to stay with his married sister. It's a witty,funny story with a lot of charm and good humour.