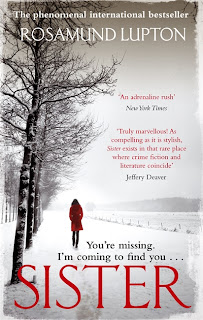 The entire blog post disappeared and I don't think anything is more frustrating than this. I had been looking out for this book for over a year. It just fell into my lap a couple of days ago and didn't I just love it.

The story is about the relationship between two sisters - Tess and Beatrice. Beatrice the older sister is always on the look out for her siblings - being the elder sister she feels not just responsible but also protective. As Beatrice grows up she becomes confident, self possessed and affluent. Tess remains according to Beatrice from a rather condescending point of view - bohemian, an art student, involved with her married tutor, insecure and pregnant. Tess is happy, settled and secure but Beatrice sees it otherwise.

A horrendous mid story crisis and Tess is dead. Beatrice takes charge. A verdict of suicide under the influence of drugs, related to post natal depression is ruled. There is no way Beatrice is accepting this verdict. Despite the pitying responses of the Police, even their mother, friends and colleagues Beatrice battles it alone
knowing that a clever murderer is out there, trying to outmaneuver them all knowing that he is the plausible one and that Beatrice is being looked at as almost mentally ill, depressed and raving.

How the story flows out of the love of a family - how an unwavering faith in a sisters character holds the story to the end - though I would have liked the end to be a bit more concise and not hanging in the air as it were.

The story telling is superb - the history of cystic fibrosis, the gene therapy involved in the treatment of the illness, the relationship of Beatrice and Todd and how her Dad's separation has affected her even in her adult life is beautifully told.

I am very glad that I eventually got to this book.
Posted by Mystica at 9:23 PM

Great review Mystica, I really look forward to reading this one, definitely next year.

Hi Mystica, thank you for visiting the spoonful blog. You mentioned that the color of the blog roll made it diffucult to read.. thank you for letting me know, I will take a look at it and see if I can fix it.

Have a wonderful weekend.

I'm glad you like this. Best Sisterhood stories I read, there is a new one from Lupton called "afterwards" I'm going to read it soon. Cheers.

This sounds very good. There's a young girl in our neighborhood with cystic fibrosis. Our neighborhood raises funds for the CF Foundation every year, but I know little about it.

This sounds like one I would definitely enjoy. Thanks.

I've just bought this, looking forward to reading it- I also bought Snowdrops which has a very similar cover which is quite confusing!

I've been wanting to read this one. Lookis like I won't be disappointed!