Penny For Your Secrets by Anna Lee Huber 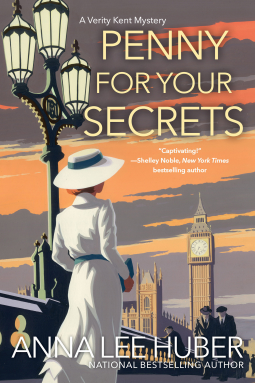 Verity and Sydney Kent are a formidable pair and when they team up in solving a mystery, there are no holds barred and you do know that the end result will be exciting (apart from being solved of course).

1919 WWI is over but dangers abound and the Secret Service is still alive and kicking with political intrigue everywhere. Mystery and murder seem to follow Verity and when her friend Ada's husband is found shot dead in his own house, after a strange dinner party where his wife points a revolver at him and says she wants to kill him, there is little doubt who the murderer could be.

Between Inspector Thoreau and Verity it is decided early on that the facts are not what they seem and a plot is afoot to make use of Ada to screen the actual killer. Unfolding a plot which goes back decades and involves many of the aristocracy is not going to be good for politics and many a peer will use his powers to shut the investigation down.

Unfolding the details of the murder, going back into various scenarios seemingly unconnected to the main the story is descriptive and there is a lot of detail. Particularly of the historical kind. I loved it!

The settings are descriptive whether it is the Isle of Wight, France or London of 1919. The main characters are strong willed and so very clever. Add to that the history of the period and you have yourselves a wonderful story.

Sent to me by Netgalley for an unbiased review, courtesy of Kensington.
Posted by Mystica at 5:53 AM

I'd be interested in this because my dad was born in 1919. I bet my mom would love this book too.

:) I love a good historical mystery set in this time period. :)

So many books, so little time said...

I'm not familiar with this author or series but it sounds very interesting. I do enjoy historical mysteries.

An era I enjoy as a setting so I'll add this to my TBR list.

I really like Huber's Lady Darby series. I haven't tried this one yet, but I want to give it a go. It sounds like another good one from Huber.