A Pretty Folly by Charlie Garratt 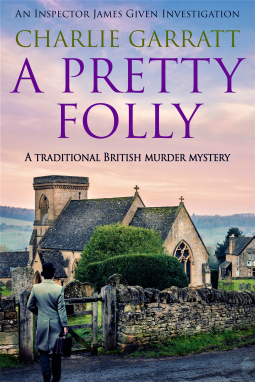 1939 England is not pretty. War is coming. There is much to worry over and James Given just after one episode of finding Jew baiters is now faced with many episodes in his home town.  Tracking down the brothers Demma who are behind the attacks, fueling hatred amongst ordinary folk is one of his goals. When a young woman's body is found in a crypt, after several months of lying there, Given knows he has a task on his hands.

Finding out who the young lady is, was not an easy task because no one seems to want to come forward with any clues and what there is seems to be those of a misleading kind. By slow deduction, and the detective work of the slow, plodding kind Inspector Givens is able to see the bigger picture of the whys and wherefores of this murder.

Sent to me by Netgalley for an unbiased review, courtesy of Sapere Books.

I liked the Golden Age feel of this one and the pre-war setting. :)

Sounds perfect for my mom.

I like mysteries set in this time period. I have to be in the right mood for slower mysteries, but I do like them from time to time.

This one is new to me but it sounds like a great mystery. Great review!

I like that time period as my parents had been born (1916-1917), and I don't mind a mystery that slowly evolves either. Thanks for sharing