The Secrets of the Tea Garden by Janet Macleod Trotter 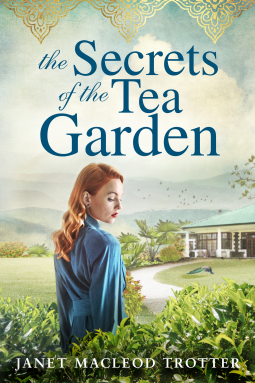 I am very partial to a tea estate story. We have a small  tea property and have heard stories of those far off days when the British ruled our estates and the lifestyle and how they did things is engrained in Sri Lankan history. The British gave us tea estates, coffee estates, railways, an administrative system, roads all over the country, the Protestant faith and most importantly English!

The fact that I do have a McLeod amongst my relations who was a tea planter as it is called here added to my interest in this story.

I loved the story, the ramifications of its setting - the coming of Independence in India was huge, and marred by strife, death and partition of the country. Sri Lanka was nothing like this. The setting alone of Libby and Ghulam set against both religious and racial divides was huge in that era. Mixed marriages were few and far between. The story of Logan and the way he treated the local women is a commonplace issue and the heartbreak of the woman was a very sad one. Added to that the saga of the entire Robson, Logan clans amidst the other characters of the story was beautifully told.

The descriptiveness of the Assam region where the tea estates were, seemed idyllic and the lifestyle took a certain kind of woman or man to adapt to the loneliness, the insularity of the communities and knowing the rigid barriers that were in place. That some adapted and some did not, and returning to their home country did not solve their woes is also taken into account. Decades spent on an estate and then moving to Newcastle did not go down well with some. It did bode well for others.

Reading the book was nostalgic for me personally and I loved the read.

Sent to me by Netgalley for an unbiased review, courtesy of Amazon Publishing UK.
Posted by Mystica at 4:25 AM

I can tell this felt personal to you. Reading your thoughts has made me want to read the book.

I'd love to read this book. It sounds delightful. And it'd resonate with me for some of the reasons you mentioned.

I can see why this book would hold a lot of interest to you. I drink quite a bit of Sri Lankan tea so that should put me in the running to enjoy the book too. No tea bags for me, leaf tea all the time!

Sounds like this book was a perfect fit for you. It sounds very interesting even though I've never liked tea.

I'm a big tea drinker and the cover instantly attracted me. I can see why you would feel a connection so I'm happy that it met your expectations and you loved it!

How great to connect to the story on such a personal level.