In the Company of Like-Minded Women by Elaine Russell 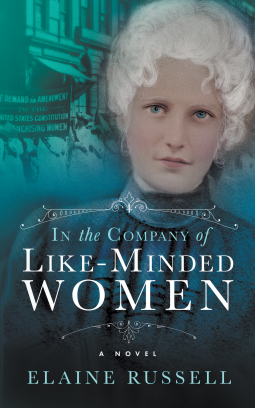 1901 Colorado. It was a very tough time for women. Unlike previously, women were more aware of the advantages of having the vote, of being independent, of owning your own property. Everyone did not want to be subservient to the whims and fancies of their husbands. Three sisters finding their way in different paths.

One recently widowed, a fully qualified medical doctor not being recognised as a caring doctor and getting short shrift from male colleagues. Trying to make ends meet and look after her two children at the same time. Mildred who was a kind soul, now grumpy and almost following their mother's rigid, hateful attitudes and then the youngest who has fallen in love and whose union is being frowned on and even denied just because her mother wants someone to sit with her whilst she gets old.

A chance visit to a sister's home with an idea of being a change and to recuperate after an illness gives the sisters the opening and the chance to breathe again and take a decision about their lives.
That Mildred changes is the biggest happiness in this book even more than the younger one's success in finding love!

Set amongst the fight for universal suffrage, a women's movement that was courageous and strong and a bid for independence for women made this a very interesting read.

Sent to me by Netgalley for an unbiased review, courtesy of Belle Histoires.
Posted by Mystica at 4:26 AM

I haven't seen this book before. I like the sister aspect of this book and think I would like it even though I rarely read historical fiction.

A nice title. I think this is as much a novel of its time as it is contemporary for the women who decide to take hold of their lives.