The Belting Inheritance by Julian Symons 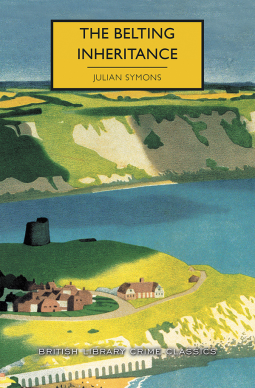 I am a sucker for these idyllistic covers. When you start the book you also know that you are in a stylised setting. Its almost medieval - the autocratic lady of the manor, no domestics (due to the great War) but ruling all with a fist of iron, two sons dead in the War, two left behind and one distant nephew adopted into the family. A motley collection but you sense a great story round the corner.

All the characters are eccentric, all live far removed from everyday life in England especially our Christopher the speaker in the story as it were. Orphaned at a young age, he was brought to the Belting house then sent to school, then on to university and has "expectations" as like everyone else though definitely not a greedy boy! the two sons specially were in their own ways wanting to get the fortune that waited them on their mother's demise.

When after years the news came through that David the eldest was alive, it threw the cat amongst the pigeons.  Stephen particularly felt that it was unjust! and Miles followed blindly. Our narrator was devil's advocate but  when David finally appeared he tended to be with the brothers, that David was an imposter. However David answered questions put forward by two people who knew from way back, but the brothers and Christopher were unconvinced.

How Christopher finally unravelled the sad story of the impersonation follows. Christopher broke from the mould, had his adventure and found love as well.

Sent to me by Netgalley for an unbiased review, courtesy of Poisoned Pen Press.
Posted by Mystica at 1:08 AM

A cover like that would tempt me to both buy the book and read it.

I love those covers too. Glad to see the book is good.

I like the Poisoned Pen mysteries. I need to try this one. Such a pretty cover.