The Secret by Jennifer Wells 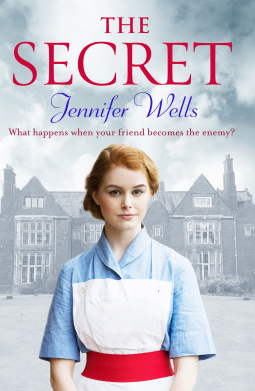 Set in two separate time frames 1920 and 1942, we have WWII fully upon the whole world and everyone buckling under its weight.

1920 and Lily finds herself a guest of Dr. Cuthbertson in an isolated manor. How the events of 1920 will again come up in 1942 is a bit uncanny. Lily gets pregnant and has a child.  Fast forward Ivy is a nurse working in the local clinic. She has to go up to Dr. Cuthbertson's house once in a while to attend to an invalid son, who is supposedly injured whilst fighting. Ivy's mother never a person in good spirits goes berserk when she hears that Ivy is going up to the manor and has met the Mrs. Cuthbertson though the Doctor is always absent and not to be disturbed.

Ivy does realise at the very onset that things are not quite right at the big house but she becomes fond of the young man and does not want to jeopardize her position in the clinic either. She is also intimidated by Mrs Cuthbertson who is rude and condescending.

The story unravels slowly and typifies the standards of the age, where a lot of stuff going on in homes was all veiled up and a curtain pulled across the whole thing to maintain an aura of respectability as that was what of prime importance.

A very interesting part of the story was the form of family planning advice offered by the clinic - privately to the poorer section of the community who had no one else to turn to. It did show women supporting women, despite the morals of the day. No mean feat this.

Sent to me by Netgalley for an unbiased review, courtesy of Aria.

Sounds like this one is true the times and does it well.

I like stories set on the periphery of the Great War and WWII. This one sounds like a good read.

This sounds like a really good WWII story. I do enjoy books set in that timeframe.

I can only imagine that family planning services for poorer women were so hit or miss in those days- nice that the book examines that in a good way. I like dual timeline stories too especially when it deals with WWI and WWII.