On Her Majesty's Frightfully Secret Service by Rhys Bowen 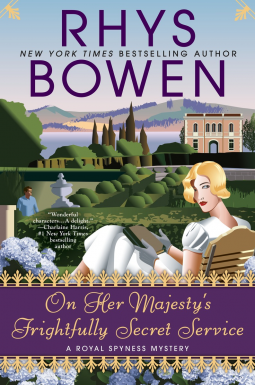 I like history and I like royalty. Coupled together with a good dose of mystery thrown in, this was a good one for me.

With a mission from the Queen on the one hand to find out exactly the situation of the young Prince's philanderings and the state of the monarchy as a result, and on the other hand trying to find out what her loved fiancee Darcy is upto, Lady Georgiana is charged with a mission. Is the Prince about to embark on a secret wedding with the infamous Mrs. Simpson and thwart the hopes of the Queen. Georgiana is entrusted with finding out the exact details and transferring them to the Palace.

To add to the complications, we have Belinda, her friend alone and friendless in an Italian convent sent there to deliver a baby so that no scandal would attach itself to her name when she returns back to London. Georgiana is also to see her and help out in whatever way she can.

Georgiana arrives at the Italian villa to face the people with whom she is supposed to spend a relaxing holiday. She hardly has any affection for any of them, including her hostess (her former school mate) who is very patronizing (having married into the Italian aristocracy!) Add to this to further complicate matters is Georgiana's erstwhile mother who has never publicly acknowledged her daughter with her latest husband. Her mother and others are being blackmailed by a guest and when the guest turns up dead and it is deemed a suicide by the local police and later changed by higher ups to murder,  If  Georgiana wants to get out of this and get back to Belinda, she needs to solve this murder.

The complications are fragmented and varied. It should normally be an irritating read because you jump from one topic to another. It is not. It is a fun read, light hearted and seems to follow a sequence which has no pattern but is nevertheless entertaining.

Sent to me by Netgalley for an unbiased review, courtesy of Berkley Publishing Group.
Posted by Mystica at 2:34 AM

I bet my mother would adore this!

I really should give this series a try.