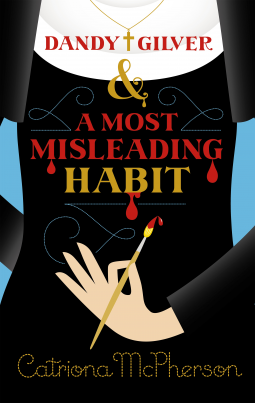 I like anything with a church, convent, monastery background and have had this book for ages. I cannot understand why I never came to it sooner as I enjoyed the story very much. I think it was the name Dandy Gilver which put me off!


A 1930s setting so it is a slower paced mystery murder detective series. There is a a bit of women not being able to told about stuff which can get irritating to someone in the 21st century but other than that once you get into the swing of the book it was most enjoyable.

The setting of a convent in Lanarkshire on a bleak moor was very descriptive and set the tone for the happenings which were unusual for a convent.  That the convent was set almost alongside a mental asylum for men was also unusual. The benefactors of all this was a family eccentric in themselves - three sisters all unmarried.

The convent has been set alight, a murder of the Mother Superior has been committed and the investigation has reached an impasse. The nuns though seemingly co-operative all seem to be holding vital clues back, there is a scandal of epic proportions lurking in the background, the village wants to have the convent and the asylum closed and so many open ended statements and ends that bringing them to a cohesive whole seems very tough indeed.

The original suspects are three escapees from the asylum but when two bodies turn up the focus turns to anyone and everyone.

The story had stuff for everyone.  It was very well told and the story got more and more interesting the more it went on. I liked all the characters as they were all different and like all humans just because they are nuns, did not make them saintly at all.

I will come back to this author as I found this book very good.

Sent to me by Netgalley for an unbiased review, courtesy of Hodder & Stoughton.

That book has a great cover! I bet my mom would enjoy it too.

This is a new one to me as well - it sounds like a great story. I agree with you, there is something about murder in a convent that is interesting. I really like murder mysteries set in the 1930s. I've added this to my "to read" list. Great review!