Two Across by Jeff Bartsch 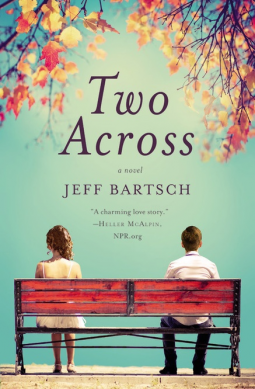 Stanley is brilliant but not street smart, kind and caring but these come across as being quirky. Having a parent whose life is within four walls and who has a phobia about stepping out adds to the eccentricity. Stanley lives in a hotel suite, albeit a small one with his mum, after his father's death. His father was a concierge in the hotel and the hotel offers this facility to them.

Vera is also very clever, her mother is a secretary trying to upgrade her life. They have no fixed home, a series of motel rooms.

Vera and Stanley meet in the National Spelling Bee and end up as joint champions. This starts them on a lifelong journey which is quirky, strange but suits them down to the ground. Fooling both sets of parents, they decide to get married in a sham wedding purely for the financial benefits that would come to them and scrupulously divide the gains into two!

Added to the story is that they are actually in love with each other but both pretend that it is not so and pursue other interests and other lives. How the two finally meet and mesh through the world of crossword puzzles of which Stanley becomes a master and Vera becomes the one who can solve them all.

It was rather prosaic at times but was a different read.

Sent to me by Netgalley for an unbiased review, courtesy of Grand Central Publishing.

I listened to this one an audio and enjoyed it. My mom just finished and liked it even better than I did.

I think I got this from netgalley too. I think I'll like it.

Not sure if this one is for me but I think I have someone in mind who would like it as a gift at some point.
Thanks for stopping by my blog.

I like the sound of this one! Thanks for sharing it.