Girl in the Afternoon by Serena Burdick 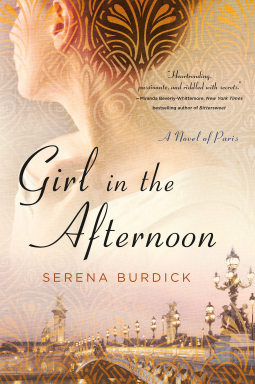 Aimee is young, quite naive but she wants to be a painter in a predominantly male dominated industry in France in the 1870s. It is not a period where such a thing would be encouraged and she is fortunate that her father does allow her some leeway in this.

Her attraction to Henri, the boy who came over from London and is brought up like a brother in the
Savaray household adds to the conflict. Henri is also deeply attached to Aimee but of a sudden he disappears and no one knows why. Fast forward a number of years Aimee herself is deeply sorrowful, maintaining a facade of normality in the face of a very troubled household. The reason for Henri's sudden disappearance becomes known and certainly understandable but Aimee's position both in the Savaray household and in Henri's life is in turmoil.

It was quite an emotional roller coaster this one, but not in a gruesome, harsh way. You felt for Aimee who was torn apart by people and circumstances not of her choosing. Fate played a role in this life and her love could never be freely expressed or shown without hurting many people around her. Aimee was restricted not just by her own character but also the behaviour of the times. Delicately told not intrusive at any times, the story slowly unfolded amongst a backdrop of war and strife in France.

Sent to me by Netgalley, courtesy of St. Martin's Press for an unbiased review.

I like the sound of this one! Both for the setting and the plot. Great review too.

This is another one that is new to me and one thats going to end up on the ever growing TBR pile. That cover is divine and it sounds like one that really struck a chord with you. So I think it's one I should make sure to read.
Thanks for stopping by my blog today :)

This sounds rather intense with the cultural/setting restrictions. Sounds like you enjoyed it okay. Thanks for sharing.