Even in Darkness by Barbara Stark Nemon 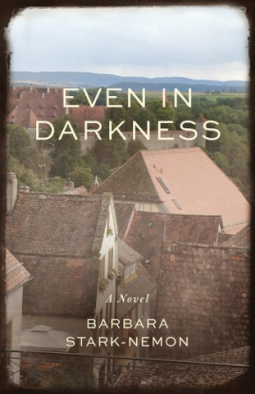 Based on a true story, this again is a book about persecution of the worst imaginable and the subsequent survival of a family.

Beginning in 1895 Klare Kohler was a happy familied woman. She came from an affluent family in Germany never considered herself anything other than a loyal German. Then came Hitler and his persecution of anyone he considered non Aryan and with it Klare's life as she knew it was never the same. Those of her family who could emigrate did but Klare's husband Jakob always thought that the idea of Nazi rule was an unimaginable one and then it was too late for them. The story of how Klare arranged and got her two children out of Germany - one via Switzerland to Palestine and one to England through different escape routes, the myriad non Jews who helped people escape at the risk to their own lives and families and finally to Klare and Jakob's imprisonment in a camp and how they were two of the lucky few to have survived forms the story.

Survive they did but with scars which would never leave and the trauma was always hidden whilst Klare got on with her life. Klare was a wonderful human being, compassionate and always ready to help others. Klare faced tragedy after tragedy head on. Bruised by the death of her 21 year old son in a terrorist attack she nevertheless never gave up.

After Jakob's death Klare made a life for herself with Ansel a Catholic priest as his housekeeper. This unconventional choice must have raised eye brows at the time but she knew that this was where she found comfort and solace.

To have had an ancestor like this would make anyone very proud. A woman of such courage and compassion is hard to find. The story is very delicately told despite the ugliness and bestiality that is part of the Holocaust. Suffering of every kind, man's inhumanity to man, the division of families and at the same time the kindness of strangers, the support of neighbours and man's support to man in times of adversity are all played out in this book.

This book was sent to me by Netgalley courtesy of PR by the Book.

There are so many stories of bravery during WWII and I love to read about them. This sounds like a great book.

Sounds like you enjoyed this book as much as I did!