THE ILL MADE KNIGHT by CHRISTIAN CAMERON 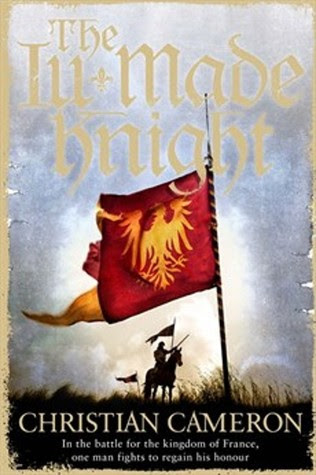 This was a win from Meghan at Medieval Bookworm. I sometimes enter a giveaway which is restricted to either the UK or Australia and if I do win (and I have) then the wins take quite a long time to reach me. The win is sent to a friend's home and she brings it with her when she visits Sri Lanka twice a year. In Australia its my children who bring the books!!!  This was a book won in September and it reached me this week. It was a book fully worth waiting for.

A story set in the Middle Ages and the Hundred Years War between England and France, the Middle Ages is depicted mainly by the struggle for simple survival. Overwhelmed by the plague which wiped out one third of the population, people just had to survive and the ordinary man was caught in either sickness or in war.

The Hundred Years War which forms the backbone of the story of William Gold our knight in the story is one which gave me mixed reactions. On the one side, the horrors of a medieval war seem horrific. The mass murders of entire villages, the burning of crops and fields in the name of war, the rape of women and the murder of scores of children seem to be so callous and so much part of the war that even the country being pillaged know that this is going to happen and it is taken as par for the course. Very matter of fact approach that if you lose this is your fate. However, at the same time traces of decency and chivalry existed amongst those who fight and the rare case of such as in the case of our knight who acts at times in such a manner are highlights of the story.

The rise of a man like Will Gold from being a mercenary and his rising and falling fortunes throughout his career, his ascendancy to a position of a leader from being a goldsmith's apprentice and a cook, the importance of status and position and how the church did play an important part in all the wars of this period were important features of this story. Religion was a major part of the story as it was a major part of most lives in this time.

A very interesting book of a period I knew very little about.

Does look informative about that period in time.

Glad you enjoyed the book especially since you have to wait so long to receive it.