Review - The Rose of Sebastopol by Katharine McMahon 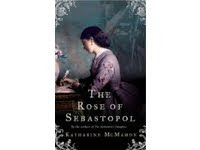 The book will be interesting to those of you who are fascinated by the mid 19th century and Victorian lifestyles and attitudes. It is a period also where the attitudes are hypocritical and you do feel like shaking things up by asking the heroine of our story to really look at life the way it is meant to be, and not the way of what other people think but then you have to think that I am being judgemental and that the fault lies with me!


It is 1854 and Rosa a cousin of Mariella Lingwood decides to become a nurse much to the dismay and horror of her mother and goes to the Crimea following Miss. Nightingale. Rosa is passionate about her ideas and wants to make some kind of difference in this world. We then come to Mariella who has never put a foot wrong, never been disobedient and has lived her life according to the rigid norms of Victorian society. Add to this Mariella's fiance a reputed London surgeon who now decides to go to the Crimea to set up hospital operations for the war wounded which will appear as a result of this war.

Rosa suddenly disappears and Mariella impulsively decides to go to the Crimea to look for her, having as a chaperone Rosa's Irish maid Nora. On arriving in Italy, Mariella is heartbroken to find that her erstwhile fiance has fallen in love with Rosa to the point of madness and his only request to Mariella is to find Rosa! I found this is a bit questionable - one fiancee looking out for the girlfriend but this is how the story evolves.We find Mariella embarking on her journey to war torn Crimea and trying to find a trace of Rosa who proves to be as elusive as could be.

The book brings so much to life - although seemingly a gentlemanly age, there is much evident of brutality - an absolute closing of ones eyes and senses to the poverty around you, the degradation of humanity in England itself, the industrial progress of England with no account taken of child labour and its horrific toll on the health of its workers. England seems to be divided into two distinct groups - the rich and the desperately poor and the few people like Rosa seems to be very few and far between. The surprising part for me was the most primitive attitude towards medicine and surgery and the absolute disregard for hygiene and basic cleanliness which was apparent in all hospitals of the time.

This was an educational read for me. It gave me knowledge which I had hitherto not had of a different aspect of Victorian life. What I had read upto now of this period was a more gentle way of life, the brutality of it was somewhat unknown to me. The book as far as the story goes was a simplistic one. I really appreciated the chronological facts and the descriptiveness of the life of Mariella, Rosa and the other characters which brought the period to life for me.
Posted by Mystica at 8:25 PM

hey Momma how have you been??
This sounds like a great story, must check it out and see if the library has it.
are you in spring weather?

sounds like an interesting read--love books set in the victorian era. glad you liked :)

I have to admit this has been on my bookshelf for far too long.

I read Katherine's other novel Footsteps which was a good read.

Thanks for the review.

Hey Mystica, just stopping by on the follow. Thanx for stopping by. I'm ur newest follower. Have a terrific weekend!!!
See ya!
Dana
Readaholics Anonymous

I really want to read this one :)

Anyway I said that I have been wanting to read this one for some time now :)

I have to get this book after reading your review. It sounds like quite an eye opener away from the romanticized notion of this Victorian time frame.