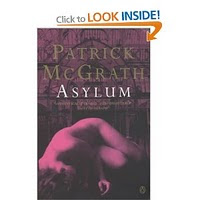 The book deals with subjects I had not upto now bothered about very much. A person's dealing with self interest to the point that it becomes an obsession - and a person dealing with falling in love which also becomes obsessive. I found the two subjects fascinating.

Dealt from the view of the consulting psychiatrist, Peter Cleave the story set in a big psychiatric hospital deals with the story of resident psychiatrist Max and his wife Stella and their little son Charlie. At the time the story starts, we realize that Stella is bored in her marriage, bored with her life. Max's career seems to have come to a stop and does not seem to be going anywhere. They are financially independent, live well and that seems that.

Enter into the scene Edgar a psychopath, who is put on garden duty and meets Stella. The fireworks seem inevitable. Edgar a creative artist in his previous life, murdered his wife and is a violent man. This somehow adds tension and intrigue to the affair which Stella embarks on.
Edgar's disappearance and Stella's subsequent decamping from the marriage seems inevitable.
What follows is the very interesting part.

The way the characters disintegrate and the way Peter tries to help Stella put her life back together is very surprising and also holds your interest very much. I finished the book in one go simply because I had to know what happened next. Sad, surprising and a bit of a revelation about the human spirit is how I would describe the book. My only complaint is the font. Such a small print which makes night time reading very difficult!!!

A very unusual read for me. One I would recommend. The style of writing is precise and this seems to somehow add to the tone of the book.
Posted by Mystica at 5:56 PM

I think I may have read a similar themed book a few years back, but recall enjoying it. I must add this one to my list. (Your reviews are very well done) thanks so much

Thanks for your review. I don't think this is the book for me at the moment. I just finished a rather 'down' book and am need of a pick me up. Will add it to the list though, as I think daughter would enjoy this in a few years. She wants to enter the field of physchiatry (sp?) and I have been setting aside books for her.

I haven't heard of this novel before - I think it sounds really interesting - I like psychological novels.

This would certainly not be one of the books I usually read either. But I did get intrigued since you liked it

Thank you so much for leaving a comment on my blog the other day. I thank you for your review...I will remember this book. Happy weekend

I haven't heard of this one before. It sounds fascinating. Great review!

I've read Port Mungo by this writer and it was a gripping novel. I must read more.

I havent heard of the book til now or read anything by this author but I usually enjoy anything with a medical premise so the setting of psychiatric hospital and subject is definitely appealing. Thanks for great review!

Thanks for your review. I love this book and I'm a huge McGrath fan in general. Have you tried his other novels?