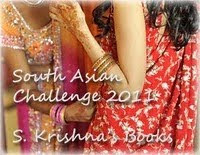 This is part of my reading for the South Asia Challenge hosted by S. Krishna.
The book a tad philosophical and at times beyond me was a very interesting read. Set in idyllic surroundings with the Narmada river (one of India's holiest rivers) as the main feature we have an un named retired bureaucrat as our chief character. He has retired from the world and feels that he is doing a good job of it in his little world of the rest house (catering to government officials and others who come to this remote part of India).
The stories which are told are short ones - each blending effortlessly into the other so that only at the end you realize that nothing is connected to each other. They are all distinct, separate stories but the cleverness of the writer makes it seem seamless.
What added interest to the stories is that we meet many different characters - both high born as well as low, different communities and religions and this adds a very interesting aspect to the stories told. It is not just Hindu philosophy but about life in general - with a great deal of common sense also thrown in. Indian culture is complex and a single reading of a book is not going to let me understand even a hundredth part of it but I do hope it will be the beginning.
An unusual book which I did not think I will like but which I eventually enjoyed.
Posted by Mystica at 2:33 AM

Both of these are new to me, but I bet they are good reads. Thanks for bringing them to my attention.

I'm glad you enjoyed this one. It might be over my head since philosophical usually doesn't work for me.

I too have never heard of this collection but it sounds like something I shoud check out!

You have been reading such interesting books lately. Again a new book o me that sounds good

Isn't it a nice surprise when a book surpasses your expectation. Going to note this one down since it seems to be worth while experience.

I haven't heard of this one before. I will have to keep it in mind, it sounds really interesting.

It sounds interesting and I am glad that you enjoyed it.

I hadn't heard of this book before, but it sounds worth checking out.

This definitely sounds interesting. I do enjoy books where I don't quite like them at first but upon reflection, I find some appreciation for them.

How interesting that you were clear to the end before realizing that the stories didn't connect. Of course, we very often read things of that nature, just assuming that in the end they will connect and generally they do. Usually they don't and that is frustrating but it sounds like the author managed to avoid that pitfall.