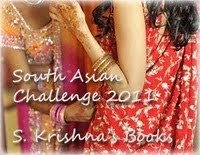 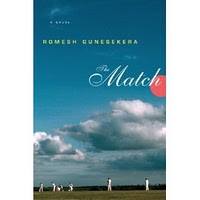 This is my third contribution towards the South Asian Challenge being sponsored by S. Krishna. It is also my first contribution from a Sri Lankan author.


For those of you unfamiliar with cricketing parlace - Cricket widely played in India, Pakistan, Bangladesh and Sri Lanka is a fever in the blood for the average man on the street. I felt the book was timely because though cricket is just a strand in the story, we are right now in the middle of the World Cup and half the matches are being played right here in Sri Lanka. There are fights and fisticuffs over tickets, black marketeering, counterfeit tickets, counterfeit promotional items and everything thrown in. Quite an exciting time. The big matches have still not started but the smaller matches have thrown up huge surprises. Ireland thrashing England for instance!!!

The story starts with one cricket match a group of young men versus the older hotch potch of Asian men. It finishes with the sensational matches of 2002. In between we get the story of Sunny.


In this story Sunny begins his story in the streets of Manila where his father is one of the expatriate journalists who have made it his home. Sunny only knows tidbits of life in Colombo as his father is not one to indulge in idle chit chat. Sunny's mother has died when he was a young child and his remembrances of her are vague. Sunny short for Sanath seems to be typical of the Sri Lankan diaspora scattered around the world. He unlike most is not a economic or political refugee and once he goes to England for higher studies has no problem at all in settling down as part of the English landscape. He does not hanker for a Singhalese identity like so many and has no hang ups of who and what he is.

However, as he grows older he seeks for an identity that has never been his. His return to the country, his search for whoever remains out of his family or father's friends (only Hector and Brandon and Lillee) are somewhat sad. At times it seems he does not know what he is seeking but that one thing he is sure of, is that he should have a closer and better relationship with Mikey his only son and not leave it too late of things that should have been said and shared.

The book is about relationships - the deteriorating one between Sunny and Clara, the monosyllabic one shared between Sunny and his son Mikey and the sadness that he failed to communicate with Lester his father, and left it too late for amends. Woven into this is the Sri Lankan expat's story in a diluted form. Sunny is quite comfortable of who he is unlike a lot of immigrants who never seem to know which is a more comfortable fit for them.

This was my first read of Romesh Gunasekera. I will be looking out for more.
Posted by Mystica at 3:34 AM

I thought this was a wonderful story. I hope you enjoyed it as much as I did!

You find some of the most interesting books Mystica! Thanks for the review!

Interesting book :) I am always happy to read a book that makes you wanna read more by that author

oh I love the sound of this ,I read reef by him ,I love cricket so this does appeal to me thanks for highlighting it ,all the best stu

This sounds like a wonderful book that not only really gets at relationships but brings a lot of culture with it. I love reading books that will teach me about cultures other than my own. And one day, I WILL figure cricket out!

Oh, I have Reef by this author. I'm glad you enjoyed this one, as hopefully that means that Reef is just as good!