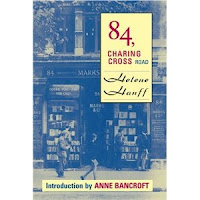 This is one of the books like the Dorothy Whipple, Barbara Comymns and Marghanita Laski which I thought I would only have to read review after review about. It was most unlikely that it would turn up at the library and certainly not in Sri Lanka. But, as I say often miracles do happen.

The book comprising a series of letters from Helene living in New York and described as a typical New Yorker to Marks & Company a very charming second hand bookshop in England.

The correspondence initially with Frank Doel who looked on Helene as part of his private correspondence goes on throughout the years of war and rationing to a more peaceful time and books going forth from England to America. The sums quoted for the books are unimaginable - 2 shillings getting Helene the best of what the bookshop can offer.

To anyone who loves English literature, history, architecture, its Kings and Queens, its colorful heritage - this book is a must. It is a trip which is nostalgic in the extreme. You need not have seen Westminister Abbey or Buckingham Palace or Hampton Court, Cambridge, Trinity or the numerous places finally visited by Helene, neither would your knowledge of Latin be necessary to appreciate the nuances of this very tender, heart warming story of individuals separated by an ocean and still finding great friendship and love (though not seeing each other for years and years) and sadly in Frank's case not at all as he dies before Helene can actually visit England.

The book is a small one of just 232 pages - and one you could easily slip into a handbag! Once started I couldnt put it down. It had to be done in one go. I am only
sorry that Helene Hanff couldnt do something similar with a New York background.
Posted by Mystica at 8:18 PM

Oh I love British heritage books, I was born in London and my dad lives in England, so I have a soft spot. Thanks for this review, I am adding the book to my Amazon list :)

After reading your review, this book has now been added to my "Must Read" list. In fact, I wonder how on earth it has not appeared on my radar til now.

Thanks, yet again, for your reviews. As a fellow Bibliophile (though an amateur compared to you!) it is great to get such recommendations.

I may not comment often, but your views are much appreciated.

Keep on reading - and writing.

This has been on my radar ever since people started comparing it to The Guernsey Literary and Potato Peel Pie Society. I'm so glad to see it lived up to it's hype.

Isn't this a wonderful little book? I'm so glad you were able to get your hands on a copy Mystica.

i can't wait to read this. i think i'll read it in february once i get through some more 2010 releases. i've been wanting to read it for years! great review.

I have heard good things about this one, and it is a book I would like to read :)

I've been an anglophile since elementary school when I became addicted to Robin Hood and King Arthur tales-- and of course Narnia, and all the Burnett books. Haven't heard of this one but I'll definitely keep and eye out for it!!

I've heard such good things about this book that I'm going to have to get my hands on a copy at some point.