The Painted Castle by Kristy Cambron 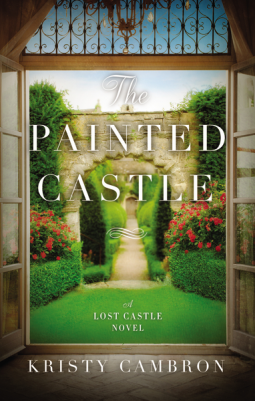 This was set not in two time lines but in three! my first read where it went into three separate stories.

Victorian England and Elizabeth an impoverished aristocrat is being touted by her mother as a suitable bride for anyone who is worthy of her. He has to be rich of course. Everything else is by the way. That is the original story of where the paintings begin - the paintings of Queen Victoria which so beguiled her consort  that he kept it only for his private viewing. That is the origin of this tale.

We then move on to the harrowing 1934 England. Almost the end of WW II and the arrival of American troops and the solace and uproar they equally brought to rural England. We have Amelia trying to hold it all together looking after orphaned children with very little funds and trying to hold on to her common sense and sanity when the Americans arrive.

We then have the present modern times. Keira is asked to authenticate a painting. During a modernisation of the castle, exciting news in the form of a new painting by Winterhalter has been discovered. Keira is needed in this connection.

All three stories are linked to Parnham Hall and the paintings - the unraveling of the story and the romance of each period was wonderful. They were not the run of the mill romances but very unusual ones - the first starting with revenge, the second with lost hopes and the third with desolation when you realise your idol has feet of clay. The stories ended well, wonderfully well.

Very descriptive of their settings in all three time frames, the characterization was splendid and the story was a page turner. I'll be looking out for this author in the future.

Sent to me by Netgalley for an unbiased review, courtesy of Thomas Nelson FICTION.

Thanks for sharing. I hadn't heard of it before and think I'd like it!

I read one of the other books you recommended in the series and really liked it, so I will look for this one as well!

Even though I don't read much historical fiction, this appeals to me.